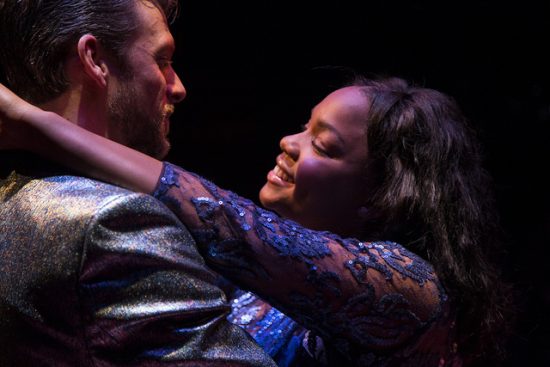 Robbie Gay as “Jake” and Krenee A. Tolson as “Deborah.” Photo by Katie Simmons-Barth.

They say opposites attract and that is quite evident with the play’s two characters; Jake, a sleazy, self-hating movie star and Deborah, a Bible-thumping virgin and aspiring actress.

Selected to appear on Broadway in the title role of “Hamlet,” Jake takes full control over his power and popularity and is given full casting approval to find his love interest, Ophelia.

Answering his audition notice, Deborah arrives at Jake’s apartment, only to find out that she has interrupted a suicide attempt.  “It was not a cry for help,” Jake says.  He wanted to die but Deborah called 911 and saved him.  It seems sickeningly fitting in a way since Hamlet’s soliloquy states “Oh that the everlasting had not fixed his canon ‘gainst self-slaughter,” knowing that he is well-aware of his sinful behaviors.

Even without an audition, Jake gives her the role of Ophelia because the other women who auditioned were “disposable.”  A woman of integrity, Deborah insists upon a full audition and eventually accepts the role.  And thus begins a battle between good and evil.

I don’t normally mention the stage crew, but here I find that they are a part of the on stage action within the play, appearing on stage with lights and even interacting in a subtle and sometimes not so subtle way with the actors, handing them beer, helping them dress, and setting up tables and chairs.

Robbie Gay embodies the role of Jake, inside and out.  With looks that can rival Tom Cruise and a fitting personality of a tormented, troubled star, Robbie takes this bad to the bone character to the limit.

Krenee A. Tolson as Deborah finds just the right levels of pure emotion as the young virgin who was told to pursue acting in NYC by none other than Jesus.  The chemistry between Robbie and Krenee is so on target that you can cut the dramatic tension with a knife.

Originally produced at the Contemporary American Theatre Festival in 2013, “H2O” finds a good home on Rep Stage in HCC’s Studio Theatre.  Performed arena style (theatre in the round), Director Kasi Campbell has intricately woven together a production that is raw, real, and relentless.