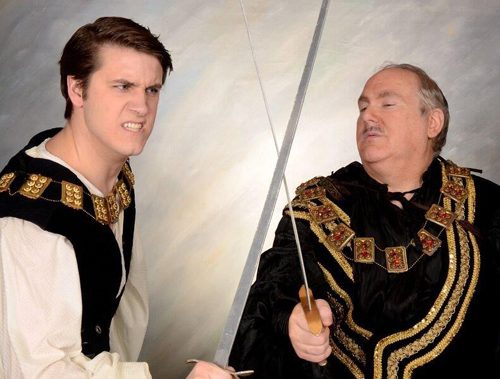 The comedy, “I Hate Hamlet,” written by Paul Rudnick and directed by Tom Colonna, is the current production presented by Dundalk Community Theatre and performed at the wonderful John E. Ravekes Theatre on the campus of CCBC Dundalk. The play humorously explores the actor’s dilemma – money versus the craft – with a whole lot of magic thrown in.

…sit back and enjoy this charming production.

Imagine you are a young actor who has gained a bit of notoriety after a run on a successful TV show that has been recently canceled. You decide to leave Hollywood for New York City and win the titular role in of one of Shakespeare’s most iconic plays, “Hamlet.” Will you be taken seriously? Can you handle it? Do you really want to do the role? Are you over your head?

These are among the dilemmas that confront Andrew Rally (Charlie Lidard) as he finds himself being talked into renting an impressive apartment reminiscent of an old English mansion by a real estate broker – the fabulous Jennifer Skarzinski as Felicia Dantine. The famous actor, womanizer and drunk, John Barrymore, had once inhabited the apartment. A big hand goes to Marc W. Smith, who skillfully wore many hats as scenic/lighting/sound designer/technical director. As the properties master, Lisa Boeren did a wonderful job in decorating the set with great detail. Costumers James J. Fasching and Eva Grove captured both modern sensibilities as well as the Shakespearean costumes worn by the actors.

Andy is doing “Hamlet” for Shakespeare in the Park and is racked with the typical actor insecurities. He is also frustrated by his loving but chaste girlfriend, Deirdre McDavey (Emily Morgan) who keeps spurning his advances with her over-romanticized view of love and obsession with Shakespeare’s heroes. Andy is also supported by his older, devoted agent Lillian Troy (Regina Rose) who we later discover has a connection to Barrymore.

Felicia claims to be able to communicate with her dead mother and suggests a séance in an attempt to contact the great Barrymore who could perhaps give Andy some advice. Lights blink and a door mysteriously opens but it isn’t until later that the ghost of Barrymore does appear to Andy. The purpose of his return it to give back and to convince Andy to go forward with this role and give him support. Andy’s already shaky resolve is also tested by his friend, Gary – a flashy, obnoxious Hollywood player who has a tempting and very lucrative offer for Andy to do another TV series.

Toby Hessenauer simply steals the show as Barrymore. The character is written very affectionately and sympathetically. Barrymore’s own insecurities are revealed as well as his strengths as an actor. He has many great moments – with the wave of his hand, he has an intoxicating effect on the women who can’t see him. His reactions to Andy’s elaborate prep before he reads his lines, as well as to the bombastic Gary, are priceless. There is also a wonderful fight scene between Barrymore and Andy thanks to fight choreographer Robert W. Oppel.

The script was updated slightly with modern references such as noting that Benedict Cumberbatch and David Tennant who have previously performed “Hamlet.” But there is a little stretch here with Andy’s agent. She would likely be a ghost herself had she had encountered Mr. Barrymore. The play was originally written in 1991, 48 years after Barrymore’s passing and this year would be the 75 anniversary of his death. But if you can believe in ghosts, you can also dismiss the fact that there were no smart phones when this play was written and simply sit back and enjoy this charming production.