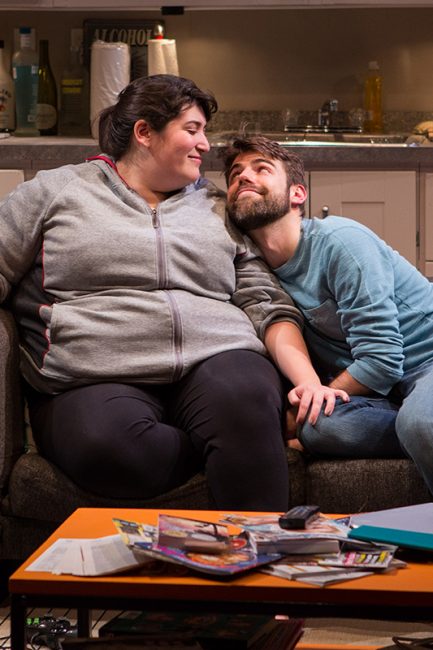 “When we are together,” exclaims Nicole Spiezio as Sam, “it doesn’t matter that we are both f*cking freaks.”  She is addressing Tommy Heleringer’s Leo, her roommate and long-time best friend.  Sam is a writer working to advance in her life and career with a new novel.  She identifies herself as “fat.”  Leo is also a writer, currently employed at “low-rent Buzzfeed,” and struggling with the motivation to complete his own work.  He identifies himself as “gay.”  Together, they are united as outcasts in a relationship so close, so passionate, so forged, that it could be overwhelming to an outsider.  The outside world gets a look into their co-dependent life at home as they talk, watch ‘Top Chef,’ and, in general, escape from the world into a friendship built on and threatened by the immense love and trust it was built upon in Morgan Gould’s new play for Studio Theatre’s R&D program, “I Wanna F*cking Tear You Apart.”

Over the course of a year, the audience gets a look inside Sam and Leo’s life in their apartment, as they deal with everything from money and boyfriend troubles to editing each other’s writing to Leo’s outrageous one-sided conversations about the world.  While almost every month, indicated by some delightful projections showcases a shift in the duo’s relationship, some play out small scenes where the two just dwell in silence and go about their daily lives.  This gives the play a feeling reminiscent of the reality TV shows Sam and Leo obsess over and gives some nice relief between some harsher moments, but it works most of all because of the strength of these characters’ likability and dimensions.

It is written so sharply and paced so perfectly that you can feel every beat, and every beat you didn’t see or hear, you still feel.

From the moment our characters are introduced through a bizarre burlesque number that never shows up again, we learn they are going to revel in how they embrace eccentricities.  Heleringer plays Leo as an instigator; passive-aggressive, provocative, and gleeful about it, but in a way that it’s clear Sam appreciates and understands.  His flamboyance is clear when it’s affected for Sam’s enjoyment, and controlled enough that Leo avoids feeling like the catty gay stereotype he easily could have been.

Spiezio, speaking of control, is absolutely masterful.  Her performance is built on restraint, playing off Heleringer’s eccentricities with a more reserved but still playful personality.  Leo releases his energy outward, and Sam has a genuinely good time playing along, but her default is to keep hers in.  Leo, for example, will enter a scene and blast music to draw Sam out of her room.  Sam will invite Leo to play Super Mario Bros. after he comes home.  Along with giving them a nice contrast and natural chemistry, Sam’s main trait comes into play through her interactions with Chloe (Anna O’Donoghue, providing hilarious valley girl charm), Leo’s office friend whose presence alone challenges the exclusivity Sam believed her friendship had up until that point.  No one wants to hurt those they love, but no one wants to be a third wheel.  But, most of all, no one wants to ever have to worry about saying “goodbye.”

So much of this play’s poignancy comes from Gould’s script.  While I feel we could dive deeper into the everyday microaggressions our characters face outside or potential problems with employment (a problem made more obvious by their surprisingly well-furnished apartment), structurally speaking, this play is absolutely sound.  It is written so sharply and paced so perfectly that you can feel every beat, and every beat you didn’t see or hear, you still feel.  A scene will begin with some incredible comedy then whip right into a sensitive, divisive subject with only one line.  And then, the silence.  Sam will not tell Chloe she doesn’t want her around because the quiet she shows her says it all.  Leo will cozy up to Sam in an earlier scene a month after she lends him a large amount of money he promises to immediately pay back.  She’ll cozy up to him and smile, and the money isn’t even mentioned in this scene, but that doesn’t mean there’s no problem.  This isn’t a suspicion kicked off by a single incident, it’s a constant from start to curtain call.

Gould and especially Spiezio make this play a tremendous slow burn and imbue the viewer with a constant, visceral sense of lurking dread in the background an enormous payoff that may make you reconsider all the events up until that point.  Like Sam and Leo’s friendship, the audience will love every scene where nothing bad happens and the two just hang out, only to realize after it ends, there’s always something that they’re thinking about, and you feel it as well.  And though you want to throw it off and forgive, and live in the now, you can’t just love everything unconditionally.  You want to heap praise upon it for making you feel so split, and part of you really just wants to tear the play apart for denying you that satisfaction.