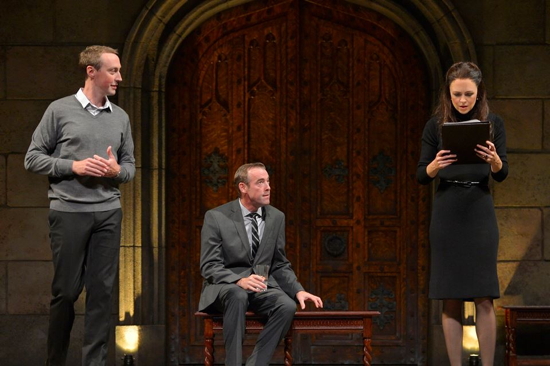 As often happens when a play has been “hyped” a great deal and receives more awards than one can count, I resisted, in the beginning, the lure of Mike Bartlett’s King Charles III. But not for long. The play is inventive, derivative yet original, playful yet moving.

The catchiness is seen in both the premise – that Queen Elizabeth II dies and Prince Charles, who has been waiting a long time, finally becomes King – and in the play’s content. Taking advantage of a law that the King (or Queen) must approve any bill passed by both the House of Commons and the House of Lords, the new king refuses to give his assent and dissolves Parliament.

The play is inventive, derivative yet original, playful yet moving.

Bartlett, who was only 32 when he wrote King Charles III, makes allusions (conscious or not) to Shakespearean characters. Like the Bard, he blends prose and blank verse and comedy, fantasy, and tragedy. The playwright has also spoken of using another Shakespearean device – the characters also represent countries.

Prince Harry, for example, like Hal of, disguises himself and walks among the common people. (Only he finds not Falstaff, but a young woman with a past. Some see Charles’s brief reign as reminiscent of the Bard’s Richard II, and the man himself as either Lear or Hamlet. Kate, Prince Williams’s smart and determined wife, may have a touch of Lady Macbeth, but without the killing instinct.

As directed by David Muse, the production is rich in wonderful performances and takes full advantage of the humor and pathos in the play.

Robert Joy, the King Charles III, is in virtually every scene. He carries the play – beautifully. The process of his hesitation giving way to stubbornness and an obsession with power, making him truly a tragic figure, is palpable in Joy’s hands. Some actors bear more of a physical resemblance to their characters than others. Jeanne Paulsen, as Camilla, is one. She also presents a more-complex personality than maybe many in the realm have of her.

Ian Merrill Peakes is strong as the decisive Prime Minister, and Charles’s adversary. Although Harry Smith doesn’t quite speak with the same accent as the others, he is a standout in conveying the inner world of the troubled Prince Harry. Christopher McLinden is the reluctant taking-over King, who is given steel by his wife, Kate, played by Allison Jean White.

One feels the pain of Michelle Beck as Jessica, the young woman who would bring authenticity to Prince Harry’s life but is rebuffed in a second. Rafael Jordan plays more than one role but makes the greatest impact as the wisecracking “philosopher” and kebab seller.

It’s become common for plays to be placed in one setting, often for practical reasons. But Daniel Ostling’s scenic design of a cathedral – reminding us that it is Queen Elizabeth’s death propels the action – also suggests the claustrophobic life of the royals. Jennifer Moeller’s costume design reaches its peak in the magnificent coronation outfits and in Charles’s medal-studded uniform. Lap Chi Chu is the lighting designer. Mark Bennett is the sound designer and composer of the stately Handelian music, and Lisa Townsend is the movement director.

Bartlett’s work may not be as lyrical as Shakespeare’s, and a few of the characters may seem like caricatures. But it is no less compelling. Although set in a very specific time and place and based on the English people’s attachment to its monarchs, in spite of their foibles, a good play always has resonance.