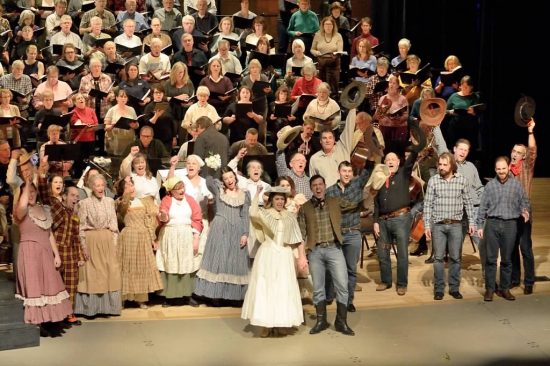 Sending echoes of decadent music through the Maryland Hall for only two performances the Annapolis Chorale accompanied by The Annapolis Chamber Orchestra and a plethora of talented soloists presented “Oklahoma!.”

The orchestra was flawless, executing the many popular Rogers and Hammerstein songs with enthusiasm and vigor. The orchestra was established in 1990 and remains under the direction of J. Ernest Green.

The story takes place on Laurey’s farm and the Skidmore Ranch in Oklahoma. The stage is used for the most part by the Orchestra and the Annapolis Chorale. It centers around the romance between a cowboy (Curly)  and a farm girl (Laurey). Despite the small area of the stage that remains the set is simple and works well with the overall running of the show.

Kicking off the introduction of the soloists in the show with a fantastic rendition of “Oh what a Beautiful Morning” is Curly played by Wes Mason. You hear Mason’s voice before you see him. A powerful, smooth voice that hits all the right notes in all the right places. Mason nailed the dialect throughout then show never missing a beat, all that and he looked great in chaps! Not an easy task. He is a very handsome young man using his dynamic personality to win the love of Katie Dixon who plays Laurey.

Dixon is outstanding; her vocals are well controlled and powerful she plays the young and somewhat naive maiden well. She controls well her performance in balancing her fear of one man and her love for another.

Maryland Hall is a great location and holds a variety of musical and dance events. However, I always find myself questioning some aspect of the sound at this venue. At times it was hard to hear the vocals over the orchestra, often the clarity of the dialogue was also lost completely.

Dianne Hood played Aunt Eller. It was hard to hear Hood’s silky textured voice at times. Hood plays the elderly aunt well often more in tune with the trends of the young folks than the kids themselves. She delivers her witty one-liners with confident and perfect comedic timing.

It’s not just the romance of Curly and Laurey that keeps the audience wanting more. Will Parker and the flirtatious Ado Annie are the perfect couple.

Cody Williams plays Will Parker. Williams is a bundle of energy singing and dancing with his smooth voice and rhythmic dance moves. A chirpy chappy, great casting in this role.  Kimberly Christie plays his scatty, flirtatious love Ado Annie.

Christie is hilarious with her strong accent, quippy one-liners, and her simplicity is adorable. I had forgotten that “I Can’t Say No” was one of the many great tunes in the show, Christie performed the song well with confidence and conviction. An abundance of exciting vocals and personality. Christie is a super fun character to watch and hear.

There are so many great songs throughout the show, “The Surrey With the Fringe on Top,” “Many a New Day” the title song and much more. The songs are crafted to influence the audience, and the whole show flows well.

Bennett Umhau plays Jud Fry. A moody character with a less than favorable past, a man with his eye set on Laurey as he works as the family’s hired help. Jud’s dialogue was difficult to comprehend, the mixture of the sound clarity perhaps and the accent portrayed for his role. In saying that Umhau has a golden voice as he belted out “ Lonely Room.” He made his physical presence known with his bearded frightening yet sad character.

Members of the Annapolis Chorale took on the roles as Laurie’s friends, farmers, and cowboys and were impressive in their backing of the soloists. Heather McMunigal played Gertie Cummings, a young woman who briefly stole the attention of Curly away from Laurie. Cummings’ voice is excellent and very distinctive, she along with the other female soloists from the Chorale were outstanding. The show is full of fun, great music, outstanding vocals and lots of gingham.

Duncan Hood made his mark as Aki Hakim, a peddler. Witty one-liners delivered with great timing and the perfect contrast to the wicker baskets and old time living.