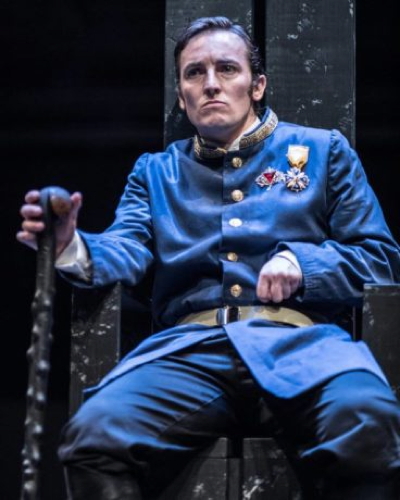 ‘Now is the winter of our discontent.’ Boy, did Shakespeare foretell that one!  It’s a line from “Richard III,” his final play set around the War of the Roses. Chesapeake Shakespeare Company is presenting their take on it, and doing the old bard proud.

Arguably Shakespeare’s worst bad boy, Richard III is rotten through and through. He plots to murder family, friends, foes, strangers, and anyone he perceives to be in his way on his blood-thirsty quest for the throne of England.  Of course, as these things often do, it ends badly for him on the battlefield and peace once more rules the land.  But what a journey Chesapeake Shakespeare takes the audience on!

The show begins before the actual play, with various company members taking the stage a la British Music Hall troubadours and balladeers.  The theatre lobby is decorated here and there with artifacts that evoke the First World War, the time period in which we find this particular take on Richard.

Chesapeake Shakespeare Company’s rendition of “Richard III” is a great night of theatre.

Director Ian Gallanar adds so many inventive touches to the production that it never lags and rips along at a great pace, holding the audience’s attention at every turn. He begins the stage action with a series of ‘family portraits,’ which identify members of the royal household. A photographer with a 19-teens style camera takes pictures of the posed groupings, and this subtle touch makes it easy to remember just who is who once the action gets going.  Gallanar assembles a team both on stage and off that give great testimony to his wonderful envisioning of Richard set in this updating of the tale.

The production makes great use of the stage on two levels, with a well-designed set by Daniel O’Brien, who is also credited with the clever light designs.  With everything from ghostly apparitions to backlit panels creating silhouettes, not to mention a stirring battle scene with bombs and guns lighting the stage and accenting David Crandall’s nicely executed sound schematics, the technical aspects of the production are exceptional.  Costume designer Heather C. Jackson does a fine job dressing the cast in period-perfect outfits, literally from head to toe.  Even their shoes like genuinely authentic.

The cast all does terrific work, but I especially enjoyed the fact that there was none of the forced British accents that most Shakespearean productions seem to unwisely insist on. All the minor characters are well presented and each comes across as a total professional.  Frank B. Moorman does a fine turn as King Edward IV, managing to appear stately and doddering at the same time.  Joshua Witt is a creepy Sir William Catesby, blindly following Dirty Dick’s murderous lead while never actually getting his hands bloody. Scott Alan Small as the Duke of Birmingham and Dave Gamble as Lord Hastings are both totally believable with great acting skills.

In the role of George, Duke of Clarence, Ron Heneghan steals every scene he’s in.  He’s a seasoned actor with an impressive skill level.  Greta Boeringer as the Duchess of York, and Lizzi Albert as Lady Anne are both terrific actors that fit their parts quite well.  Each is able to summon deep emotion and transmit it well.

As Queen Elizabeth, Lesley Malin is compelling.  In scene after scene, she is consistent and forthright in her portrayal.  When she learns of the death of her sons, she is heartbreaking.  Ms. Malin presents The Queen with a regality that never falters and hits all the right notes.

As the dastardly Richard, Vince Eisenson does something I would have thought nigh onto impossible.  He makes Richard accessible.  True, he’s diabolical, disturbed and an all-around bad egg.  But in Eisenson, there is another dimension I’ve not seen in other productions.  This actor speaks his awful truth with such matter of fact-ness that he makes you almost – almost – fall for it, just as the gullible Lady Anne does.  His Richard is driven by a narcissistic pathology that allows for only one interpretation of events. A remarkable achievement by an outstanding actor.

Whether or not this is the winter of our discontent I guess depends on which side of the political spectrum you fall on.  But regardless of your party affiliations or the lack thereof, Chesapeake Shakespeare Company’s rendition of “Richard III” is a great night of theatre.  Draw your own corollaries to today’s political climate, but go see this show.  You won’t regret it.

Running Time: Two hours and 30 minutes, with a 15-minute intermission.