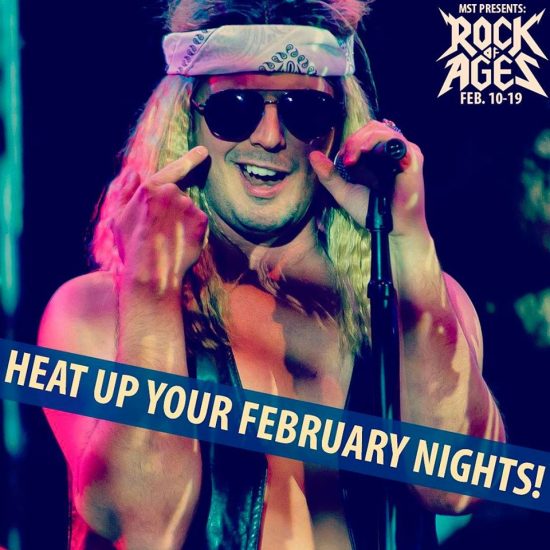 Stacee Jax (Art Bookout) is “Waiting For A Girl Like You” to spice up his weekend as he takes over the Bourbon Room with his band, Arsenal! Photo courtesy of MST.

As a child of the 1980s, the soundtrack of Rock of Ages was the cornerstone of my initial musical education. The memories of excessive hair spray, guys wearing as much make up as the ladies,  and tight spandex provided the base wardrobe for every rock star wannabe in the era.  The 1980s music was about enjoying life.  The live theatrical version, “Rock of Ages,” now playing at the Milburn Stone Theatre in North East, MD, reaches for the imagery of the Sunset Strip and the music that reflects the desire to enjoy life and love.

Directed and Musically Directed by Shane Jensen, this rock/jukebox musical is based on a book by Chris D’Arienzo; featuring the music of glam metal bands of the decade like Styx, Journey, Bon Jovi, Pat Benatar, Twisted Sister, Steve Perry, Poison, and Europe.

…not to be missed…

This not to be missed show includes hits such as “Don’t Stop Believin’,” We Built This City,” The Final Countdown,” “Wanted Dead or Alive,” “Here I Go Again,” “Harden My Heart,” “Can’t Fight This Feeling,” “Renegade,” and “I Wanna Know What Love Is.”   The songs are enhanced by the energetic choreography by Leslie Perry and the talented ensemble.

“Rock of Ages” follows the story of an aspiring rocker named Drew Boley (Brandon Zebley) who works as a busboy at the Bourbon Room owned by Dennis Dupree (Tom Hartzell) and Lonny Barnett (Ryan Devoe) who serves as narrator.  There, Drew falls for a waitress named Sherrie (Gina Dzeielak), who has dreams of big time acting.

Trouble abounds when a pair of German developers Hertz and Franz Klinemann (scene stealers Matt Tart and Codey Odachowski) want to buy the Bourbon Room against the wishes of a city planner named Regina (Laura Moss).

When Dennis and Lonny duet on REO Speedwagon’s “Can’t fight this Feeling” the campy nature of this production is on full blast by both performers.

Poison’s “Every Rose has Its Thorn” lets every cast member shine as their respective voices are spotlighted in true charismatic fashion.

The strength of the voices that we hear within Brandon Zebley as Drew and Gina Dzeielak as Sherrie make in quite obvious why they were cast in the lead roles of this fine production.  The takes on Steve Perry and Journey songs prove an exceptional vocal range by both performers.

The turmoil throughout the story, is resolved through the breaking of the fourth wall by our faithful narrator, Lonny,  who reminds us all that our destiny is created by our own actions not by those of another.  The message, which does not go unnoticed, is that it is acceptable to not meet every goal you set up for yourself, but we are reminded to never stop reaching for those dreams.

Running Time: 2 and a half hours with one, 15 minute intermission.

“Rock of Ages” plays at the Millburn Stone Theatre at Cecil College in North East, MD  thru February 19.  For more information, visit online.