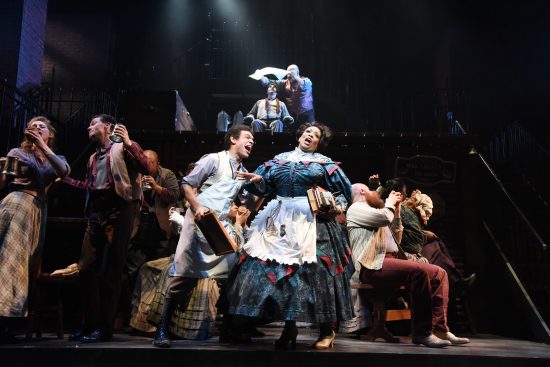 Britain has always been given a bad rap—fairly or unfairly—for the taste of their food. If anyone had actually eaten Mrs. Lovett’s meat pies in 19th century London, you would see why.  The meat contained in those goodies was derived from sliced and diced humans from a killing spree by a man who was eventually called Sweeney Todd, The Demon Barber of Fleet Street.

The ultra-successful dark musical with the same name has come to the Main Stage of the Olney Theatre Center in all its gory, er, glory. Propelled by the music and lyrics by Stephen Sondheim and a book by Hugh Wheeler that was adapted by Christopher Bond, “Sweeney Todd, The Demon Barber of Fleet Street” captured eight Tony Awards in 1979 including Best Musical.

With the production ably helmed by Olney Theatre Center’s artistic director Jason Loewith, it is easy to see why “Sweeney Todd” and its numerous revivals has been a hit for decades.  Aside from the wonderful music, the production at Olney is bolstered by superb atmospherics, creative staging and top-notch performances by a talented ensemble.

Sondheim’s rich score and, at times, hilarious lyrics are magnificent and convey the story in operetta form with little spoken dialogue. This complex score is handled expertly by Musical Director Christopher Youstra, Conductor Doug Lawler and the nine-piece orchestra.

Songs, such as “The Ballad of Sweeney Todd,” “Poor Thing,” “Johanna,” “Pirelli’s Miracle Elixir,””Pretty Women,” “Epiphany,” the comical “A Little Priest” and “Not While I’m Around” are highlights.

The well-known tale centers on Sweeney Todd (formerly Benjamin Barker) who was wrongfully imprisoned for 15 years by corrupt Judge Turpin. He returns to London seeking revenge on the Judge for ruining his life by separating him from his wife and child.

Todd runs into Mrs. Lovett, a baker, whose meat pies are lacking protein and aren’t selling. The two see a mutually beneficial partnership: he slays the Judge in revenge as well as others from his barber chair; she uses the carnage to bake into the pies that are sold to unsuspecting customers.

A love story also unfolds as Todd’s daughter, Johanna, has been taken in by the Judge and Todd’s sailor friend, Anthony, falls in love with her and goes to great lengths to get her.

However, the story does not end well as far as the characters are concerned, but it was a lot of fun getting to the macabre conclusion thanks to an infusion of black comedy.

…the production at Olney is bolstered by superb atmospherics, creative staging and top-notch performances by a talented ensemble.

In the title role, veteran actor David Benoit triumphs with his commanding presence on stage and muscular baritone vocals. A sturdy actor through and through, Mr. Benoit conveys his despair over his plight and his desire to lash out at not only his antagonist but all of humanity.

He has solid performances in “The Barber and His Wife,” the duet with the Judge in “Pretty Women,” and a tremendous emotion-packed rendition of “Epiphany.”

For the role of the cheerful and garrulous Mrs. Lovett, E. Faye Butler excels. While the temptation is there to ham up the part, Ms. Butler maintains enough restraint while allowing the comical lines to hit the mark.  Mrs. Lovett is smitten with Todd but fails to divulge an extremely important situation.

Ms. Butler sings beautifully throughout. Yet her duet with Mr. Benoit, “A Little Priest,” the hilarious number that concludes the first act in which Mrs. Lovett suggests to Todd the idea of sharing the corpses of his victims to create the pies, is a showstopper.

As the evil Judge Turpin, Thomas Adrian Simpson turns in a solid performance. The audience roots for his demise for sending Barker/Todd up the river on trumped-up charges, raping Barker’s wife and having designs on Barker’s daughter Johanna.  His excellent baritone is demonstrated in “Johanna,” and the duet with Mr. Benoit, “Pretty Women,” just prior to his exiting the barber chair down the chute, is well-done in a chilling sort of way.

Grace Jones as the lovely yellow-haired Johanna, the object of Anthony’s (as well as Judge Turpin’s) affections, puts her soprano voice to good use in “Green Finch and Linnet Bird.”

Jobari Parker-Namdar as Anthony exhibits a strong tenor voice in another “Johanna” number and with Ms. Jones in “Kiss Me.”

Frank Viveros plays Pirelli, a con artist who as a barber first loses a bet to Todd and then his life as he attempted to blackmail him. Mr. Viveros plays the campy role adroitly and his rendition of “The Contest” is outstanding showcasing a strong dramatic tenor voice.

Michael J. Mainwaring does well as Tobias, the sidekick to Pirelli and eventual assistant to Mrs. Lovett. His solid tenor is evident in “Not While I’m around,” a duet with Ms. Butler.

Rounding out the leads is Rachel Zampelli playing the male role of Beadle Bamford, the Judge’s accomplice. She performs “Ladies and Their Sensitivities” well.  And Patricia Hurley does a sterling job as the Beggar Woman who everyone dismisses until her tragic end.

The 10-person ensemble performs very well especially with “The Ballad of Sweeney Todd.”

As noted earlier, the visuals lend reality to the time and place. There is the industrial-themed, multi-level steel set designed by Milagros Ponce de León that provides depth and texture to the action.  Included is the notorious barber chair that is rigged so that the unsuspecting victims of Todd’s throat-slashing slide down a chute to the basement bake house.

Scene changes are fluid as bulky set pieces are moved in and out rapidly. Mr. Loewith has his cast utilize the entire stage and upper levels of the set as well as the aisles in the audience for entering and exiting that expands the presentation.

Colin K. Bills’ stark lighting design contributes mightily to the atmosphere. The stage is mostly dim with a light layer of fog to depict London as well as to represent the darkness of the plot and the ghoulish acts that are the cornerstone of “Sweeney Todd.” Selective spotlights highlight key parts of the action rather than illuminating the entire stage at once.  Don’t expect much color here; this is not a Rodgers and Hammerstein musical.

Seth Gilbert’s costumes are spot-on period apparel adding to the authenticity. Even the costumes are darkened to simulate the soot that existed in from the filthy air that Victorian-era Londoners had to endure.  Talk about paying attention to detail!

The costumes reflect the clear demarcation of classes in London’s society that form the backdrop to the story—from the poor beggar woman’s natty rags to the well-heeled Judge’s aristocratic attire with the working class garb of Todd and other working “stiffs” in between.

In true Olney Theatre Center style, “Sweeney Todd, the Demon Barber of Fleet Street” is yet another Broadway-caliber production. Kudos to Mr. Loewith, Mr. Youstra and the enormously talented cast and crew for a splendid interpretation of this classic.

It would be wise to purchase your tickets to this spectacle, and if nothing else, you will at least be paying more attention to what you eat.

Running time: Two hours and 45 minutes with an intermission.

“Sweeney Todd, the Demon Barber of Fleet Street” runs through March 5 at the Olney Theatre Center, 2001 Olney-Sandy Spring Road, Olney, MD 20832. Tickets may be purchased by calling 301-924-3400 or by visiting online.