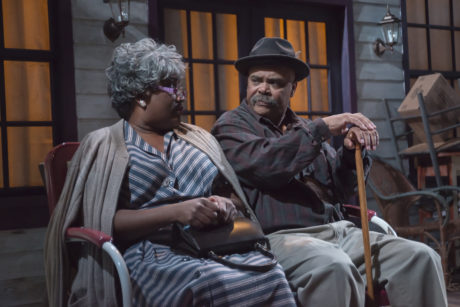 Broadway hits have a mixed record when it comes to longevity.  Some capture the zeitgeist but don’t maintain a strong presence in the repertory in later years; others appeal to New Yorkers and the occasional north-easterner, but few others.

D. L. Coburn’s two-character drama “The Gin Game,” originally a vehicle for the great Jessica Tandy and Hume Cronyn, has been a nationwide staple for 40 years now—long enough to become a go-to play for mature actors of the stage and screen alike.

Set in a run-down retirement home, it offers a pair of meaty, complex roles and an equally complex dénouement.  All over the game of Gin Rummy and set around a simple, grey, square folding card table.  Why go to see this show?  Because it pulls no punches.  You’re not going to find any gauzy vision of life’s golden years here; instead you get two people wrestling and losing to their own personal demons, forced by circumstances to meet again and again in the only narrowly-confined space where they can come close to being themselves.

It’s profane, it’s funny, it’s moving, and in the right hands – it’s sure in the right hands here! – it’s a great evening of theatre.  Metro Stage’s regulars have created something of a Valentine’s Day present, especially aimed at those for whom love is still the ultimate four-letter word.

(Hint:  It’s OK to see it later in the run, it’s more in character for the anti-love crowd).

Mixed in with the mayhem, of course, are the lessons of the card game in question:  each hand you’re dealt 10 cards, which you must organize in matches or runs in order to win.  You pick up and discard a few cards along the way; is it luck, is it skill, or maybe a little of both that gets you what you want?  And if instead of gin rummy we’re talking about life, what does that portend for a person in his or her later years if luck and skill are indistinguishable?  Coburn’s script remains solid, all the more so because he doesn’t hit you over the head with the play’s meaning; and he refuses to wrap up the story, leaving you to ponder where the relationship we’ve seen explode onstage might be headed next.

To be honest, when you have polished performers like Roz White and Doug Brown, I can’t help thinking all director Thomas W. Jones II had to do was toss them a deck of cards and set them loose onstage.  The pair settle down to business in fine form; as Fonsia Dorsey, White has to present herself as Ms. Prim and Proper, opposite Doug Brown’s grousy, foul-mouthed Weller Martin.  Each character has aches and pains, and of course it is the past that pains both of them most dearly.  White’s outer shell begins to crack, which is spectacular in its way, but it is Brown’s breakdown, from his losses at cards and life itself, that make your heart stop.  And of course, it is Weller’s tough outer shell that turns out to be the toughest of all to crack.

Set designers Carl Gudenius and Shuxing Fan have created just the sort of run-down retirement home that is every elders’ nightmare, complete with “vintage” vinyl chairs, porch-rocker and c**k-eyed electrical fixtures.  And Wiliam G. Wacker’s sound design is smooth, focused as it is on the golden oldies that are now permanent fixtures in the high school jazz band circuit (a sure sign of, ahem, maturity).  Alexander Keen’s lighting guides us through the various times of day, with a hint of the rest home crowd that Fonsia and Weller are so desperate to avoid.  And Sigridur Johannesdottir’s costumes set the right tone – whether it’s Fonsia’s bright bathrobe-and-curlers ensemble or Weller’s dull earth tones.

You have a couple weeks yet, folks, to catch two of Washington’s best, at a game that all can play but few can master.  Metro Stage’s “The Gin Game” is an enduring classic.