Theatre Review: ‘The Peking Acrobats’ at The Gordon Center 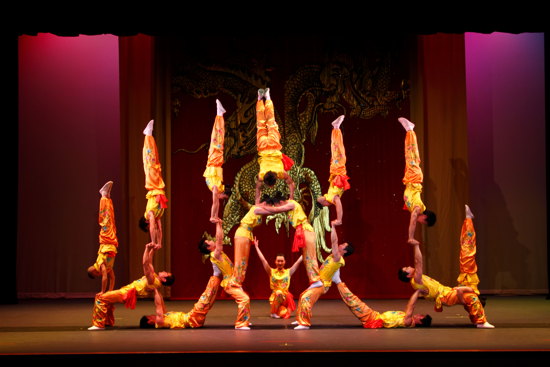 Mix Chinese culture, acrobatics, humor, and stunts you never thought humanly possible and you have The Peking Actobats. This spectacular show made me gasp and laugh and just wonder in amazement – “how did they do that?”

The show starts with four colorful dragons, reminiscent of Chinese New Year. The backdrop, a gorgeous red velvet curtain with an enormous golden dragon, sets the scene for the entire show. Talented musicians play Chinese music in the background, which also enhances the show’s feel. From the start, your senses are full of sight and sound and color.

The dragons pounce around the stage like dogs, picking up balls and rolling over, going up on hind legs, and at one point, even scratching themselves, adding a little humor. But The Peking Acrobats wouldn’t be the Acrobats if they didn’t do something that makes you saw ‘wow’. During this first act, a man stands on a large ball, which the dragons proceed to roll on along a seesaw. And it can’t be easy for two dragons to get all eight legs up on a rolling ball and move it along.

The dragon act is just the first of more than 15 acts in the show, each unique and with its own level of difficulty. Since the acts are constantly changing, your eyes are glued to the stage, wondering ‘what are they going to come up with next?’ Acts range from men jumping through hoops to men jumping rope in basketball jerseys to a woman balancing glass objects on every part of her body. But of course, it’s not just jumping or balancing… it’s jumping through the highest of six hoops stacked on top of each other, three men doing backward flips at one time while the rope is still turning, and a woman balancing five glass objects on her hands, feet and mouth simultaneously.

The performers know to start small, beginning the act with martial poses or coy walks from folk dance tradition before handling a prop to give the audience a feel of its weight and substance. In one act, the performer even goes into the crowd, having the audience knock on the object to see that it’s glass and bringing an audience member on stage.   From there, the difficulty builds in layers. Eventually, a man flips three bowls on top of his head while balancing on a board on top of a cylinder. Or eight plates are spinning at one time on top of sticks while 16 more are spinning on the top of a table and on top of pedestals. Or a man is on a bridge of wood supported by men’s chests, bending backwards while spinning plates. You see what I mean? Utterly phenomenal.

The show’s finale includes more performers than I can count getting on top of a bicycle and waving their fans. With their gold costumes, it’s an amazing display of color and movement. The Peking Acrobats bring the circus act to an entirely different dimension.