Theatre Review: ‘The Pirates of Penzance’ at Way Off Broadway Dinner Theatre 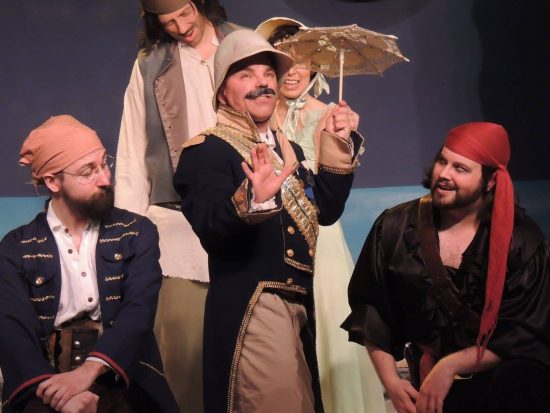 Way Off Broadway, a cozy and friendly dinner theatre in Frederick, has just been voted Best Theatre in Frederick Magazine’s Best of Frederick contest.  Attracting some of the most enthusiastic talent in the Frederick area, it is not hard to see why they have earned this honor.

Currently Way Off Broadway Dinner Theatre is producing “The Pirates of Penzance,” an operetta by Gilbert and Sullivan which officially premiered at the Fifth Avenue Theatre in New York City on NYE, 1879.  Dusted off in 1980 by producer Joseph Papp, a fun, accessible and easy to swallow version of the classic was created for the New York Shakespeare Festival.

If you are looking for an evening of light entertainment that will bring a smile to your face, then take a voyage to Frederick see “The Pirates of Penzance” at WOB.

Perhaps the “Mel Brooks” of the Victorian-era, Gilbert and Sullivan collaborated on fourteen comic operas between 1871 and 1896, including “H.M.S. Pinafore,” “The Mikado,” and of course “The Pirates of Penzance.”

This hilarious farce follows a young, orphan pirate apprentice named Frederic (a clean-cut and charming Matthew Hirsh) who disavows the pirates’ way of life and falls in love with Mabel (a sparkling and vocally superb Lawren Hill), Major General Stanley’s (a scene stealing Brian Clarke) most beautiful daughter.  The Pirate King (a funny and lovable Jordan Stocksdale) soon discovers General Stanley has lied about being an orphan in order to keep the pirates from stealing all of his belongings and daughters.  Due to a technicality,  Frederic might have to choose his duty to the pirates over his love for Mabel.

What first catches my eye upon walking into the theatre is a portrait of Queen Victoria, hand-painted by none other than one of the directors of the play, Ariel Messeca.  Hanging above the stage, this lively painting is just one of several nice touches that helps to make the WOB production enjoyable.

Co-directors Ariel Messeca and Bill Kiska have assembled a very enthusiastic ensemble.  It was fun watching the men get into their swashbuckling pirate roles; sporting beards, swords, and plenty of swagger.  Singing with lots of heart, you can tell that the female ensemble also loves being a part of this Gilbert and Sullivan classic.

Songs like “Poor Wandering One!” with the ladies and duets with Frederic like “Stay, Frederic, Stay!” are all performed with vocal clarity and conviction.  And of course, don’t miss one of the most famous patter songs in musical theatre history called, “I Am The Very Model of a Modern Major-General.”

If you are looking for an evening of light entertainment that will bring a smile to your face, then take a voyage to Frederick see “The Pirates of Penzance” at WOB.

“The Pirates of Penzance” plays through March 11, 2017 at the Way off Broadway Dinner Theatre in Frederick, Maryland. For more information, visit online.