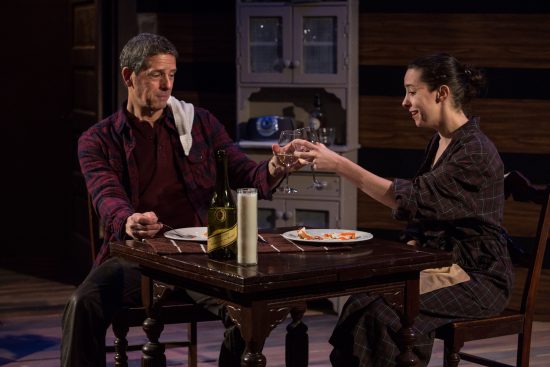 Jeff Allin as The Man and Emma Jackson as The Woman. Photo by Tony Hitchcock.

Playwriting being a solitary task, it should come as no surprise that playwrights often enjoy pursuits that are equally solitary.  Take fishing, for example – given the crush of audiences, and the obligatory glad-handing and cheek-kissing that comes with every opening night, there is something special about getting away from it all and trying to trick a trout or two into biting your hook.

And while you stand there, perfectly still and silent, allowing nature to seep into your soul.  The ability to achieve oneness with your surroundings, and the thrill of that unexpected bite at the end of your line can be truly magical.

…an intricately-woven tale of love, lust, nature and the mysteries of the human condition.

Poets, too, understand the magic of the rod and reel; William Butler Yeats’ “Song of the Wandering Aengus” uses fishing as a central metaphor in a re-telling of an Irish myth.  Aengus’ life-long obsession with finding his soul’s desire, so movingly expressed in Yeats’ poem, inspired playwright Jez Butterworth to create “The River,” an intricately-woven tale of love, lust, nature and the mysteries of the human condition.

Spooky Action Theater’s current production of “The River” offers audiences a revelatory, deeply mysterious experience not to be missed.  Set in a remote cabin by a trout stream, it wears its archetypal nature on its sleeve; we meet The Man (the brilliant Jeffrey Allin), who brings his latest girlfriend, The Woman (Emma Jackson, in a stunningly compelling turn), for a weekend of fishing and love-making.  The Man’s first test of his mate comes when he insists that she accompany him for an especially promising fly-fishing session, in the dead of a New Moon night.  The plan falters with The Woman’s equally strong insistence that she finish reading her book (by Virginia Woolf, no less).

The tension in the cabin—as well as the audience—rises as it becomes clear that both have closely-held secrets, complicated immensely by the revelation that others have passed through here as well.  Not content just to have a weekend getaway, we watch as The Man courts first The Woman and, at another time, The Other Woman (the charmingly free-spirited Karen Novack) in disturbing ways.  We hear snatches of old poetry, verbatim accounts of fishing by the Ancient Greeks, an old tune or two, and there’s even a lightly-broiled fish dinner, served with chardonnay and prepared before our very eyes.

Butterworth asks us to think beyond the specifics of the action and to contemplate psychological dynamics at play.  The most intimate moments reflect The Man’s Aengus-like need for a soul-mate that is as urgent as it is unfulfillable.  Mysteries abound, as do revelations that are by turns hilariously ironic and dark; and as the action comes unhinged in time we are caught up in a web of desires and revelations that border on, but never cross over into, the sinister.

“The River” isn’t about to reveal its secrets, and the performances are so compelling that audiences will find themselves returning to Spooky Action Theater’s production again and again, each time for a different experience.  Rebecca Holderness directs this small ensemble with a sure hand, and the subtle emotional trajectory of each scene is finely-tuned.  Vicki R. Davis’ set, meanwhile, has that deceptively cozy, wide-planked feel of the country, made ominous by Matthew E. Adelson’s lighting effects.  Erik Teague’s costumes evoke rustic simplicity one minute, but can just as easily turn to the equivalent of a fly-fisherman’s most dazzling lure.

“The River” runs February 2-26 at Spooky Action Theater, 1810 16th Street NW, Washington, DC  (the corner of 16th and S Sts.) There is free parking for Spooky Action patrons behind the Scottish Rite temple, kitty-corner across the street from the theatre.  For more information, visit online.