Theatre Review: ‘The Taming of the Shrew’ at Synetic Theater 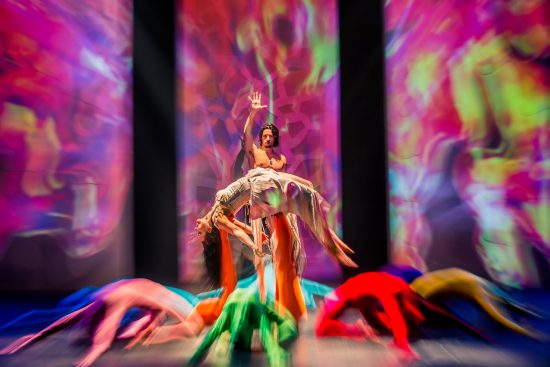 A play that can grate on modern sensibilities, Shakespeare’s “The Taming of the Shrew” has been mounted in a few ways to appeal to contemporary audiences, but Synetic Theatre’s re-worked staging is by far the most successful I have seen. The production transforms the story into a vibrant carousel of color and laughter, with a laser-focused artistic vision.

Synetic’s artistic director and co-founder, Paata Tsikurishvili, updates the story for 21st-century audiences, transplanting the action from 16th century Padua to ritzy ‘Paduawood,’ a stand-in for contemporary Hollywood. We open on a grieving family; famous fashion designer Baptiste has lost his wife, the mother of his daughters Katherina and Bianca. The sad scene quickly gives way to the glitz and glam of the family’s much-photographed life, which younger Bianca loves and Katherina despises. Despairing that his eldest daughter will ever marry, Baptiste sends out a secret ultimatum; he will give a cash reward to the man who will marry her. The call is heard by cash-strapped artist Petruchio, who shows up to match wits (and muscles) with Katherina. The couple’s turbulent marriage provides the engine for the rest of this profoundly delightful piece.

… a vibrant carousel of color and laughter, with a laser-focused artistic vision.

This production is one in a series of Synetic’s wordless Shakespeare stagings, which the company innovated to make the works more accessible. The absence of dialogue cedes artistic control to the design team, and they definitely deliver. Costumes, courtesy of Anastasia Rurikova Simes, give a 90s vintage feel, despite the presence of smart phones and selfie culture; Bianca’s bright yellow gown and pink gloves are reminiscent of the movie “Clueless.” The retro choices underline the fashion culture’s backwardness and their aesthetic of superficiality, best shown in an epic catwalk scene. Simes’ simple set design is four gray monoliths, the better to display Riki Kim’s video projections, which visually signal events and emotions, from rainfall to Petruchio’s artistic creations.

The excellent design undergirds equally dynamic acting. Performances are physical to the point of gymnastics, requiring the finely-tuned choreography of Zana Gankhuyag. Movement serves as a storytelling device, and the dances and pantomime that replace dialogue also provide rich opportunities for physical comedy. Justin J. Bell does very well as Bianca’s love-struck suitor and innocent out-of-towner, Lucentio, who cross-dresses to win his lady love. Alex Mills as Grumio, Petruchio’s henchman, provides consistent comic notes as he glides in and out on his scooter.

Tsikurishvili, as Katherina, is perhaps the most physical performer, smashing, pummeling and wrestling through the production, her body stiff with rage. The actress uses raw physicality to capture Katherina’s feelings of entrapment. Ryan Sellers as Petruchio sells the character’s suave arrogance, as well as his real charm. Their rough courtship scene (which blurs the line between dance and fight choreography) illustrates their equal standing, which makes Katherina’s subsequent ‘taming’ a little more palatable. Petruchio’s attempts to gaslight her into wifely submission find fruition in a dinner scene of perfectly calculated cruelty, weaponizing Stomp-like orchestrated sound and chicken-head masks, a feat that received a round of applause.

The enjoyable ride ends again on the red carpet, but with solidarity and not submission. Despite it being a wordless production, the creators make sure Katherina has her say. If I have my say, it is that this richly imagined and impressively mounted production should not be missed.

Advisory: Nudity and sexual situations. Recommended for ages 14 and up.