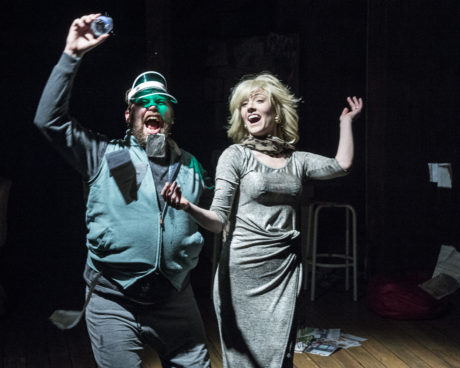 Deep down we’re all apes, right?  Kissing cousins with the monkeys, gorillas and of course those adorable chimps.  We’ve got the bananas, we’ve got our instincts, our sense of turf and family, along with that profound inner urge to protect everything we hold dear.

Sometimes, however, this is a problem; sometimes the very impulses that link us to our primate family prove to have consequences that we cannot predict or control.  As much as we may imagine a world of peaceful coexistence with these related species, that world simply doesn’t exist.  This rather cold, hard fact lies at the heart of Nick Jones’ tragicomedy “Trevor,” which tracks the breakdown in relations between Trevor, an adult male chimpanzee, and his caregiver/ ”mom” Sandra.

Doug Wilder, meanwhile, is absolutely endearing as Trevor; an endearment that cannot last for long, and his final breakdown is made all the more affecting by the relationship he has already developed with the audience.

Set in a nicely-appointed ranch house (designed by Kathryn Kawecki, who also contributes to the costumes), “Trevor” opens in the spirit of the TV comedies that Nick Jones is known for; one by one a neighbor, a sheriff and an animal control agent troop in to observe Trevor, with a growing sense of anxiety for Sandra’s safety, as well as their own.  True to the sitcom formula we know so well, Trevor at first charms the socks off of you with his innocent antics—jumping on the sofa, changing channels with the remote, web-surfing, etc.  Those tiny flashes of temper, for the moment, seem manageable.

But as the action unfolds it becomes clear that Trevor has outgrown his surroundings and needs to go elsewhere, a prospect that fills Sandra, who has raised him from a baby, with terror.  As Sandra, Leigh Jameson captures both the comical cluelessness and the ultimately tragic self-delusion of a woman who sees her life, and so much of what she has lived for, slipping away.  She’s been around Trevor so long that even her gestures have that tell-tale primate look.

Doug Wilder, meanwhile, is absolutely endearing as Trevor; an endearment that cannot last for long, and his final breakdown is made all the more affecting by the relationship he has already developed with the audience.  Jones adds the ironic twist that Trevor is a former TV star, who was a national sensation when young.  Like so many child-stars, Trevor is obsessed with the prospect of a comeback; and occasional (imaginary) visits from Oliver, another show-biz chimp who allegedly has assimilated with mainstream society, only heightens his need to regain his former star status.  Aaron Bliden projects an ease and suave, debonair demeanor as Oliver; decked out like a disco king, he represents the chimp equivalent of that human longing for peaceful coexistence and acceptance across species.

Amanda Forstrom gives a strong performance here as Ashley, Sandra’s next-door neighbor, whose concerns about Trevor are heightened exponentially by the fact that she has an infant at home—a baby whose cries register with us as natural, but which trigger an entirely different response with Trevor.  Her brief turn as Morgan Fairchild, a Hollywood star whose memory triggers a completely different set of fantasies for Trevor, is well done, precisely because it’s a reminder that what the chimp perceived as friendship was far more exploitative than he wants to admit.

“Trevor” is based on a true story of a former TV chimp named Travis, whose brutal attack on one of his caregiver’s friends created a sensation (and, yes, made for some major footage on Animal Planet).  Jones widely steers clear of the details from the original story, in part because I suspect he finds humor to be a better way to address the problems that Travis’ story raises.  We see the high price we pay for naïve notions of togetherness and family, and come away with the sober understanding that as hard as it may be to give up our old ideals, failing to give them up can be even worse.

(Still, it would have been nice if Jones had gone easier on actors between gigs (so to speak):  yeah, like Trevor we do get cranky when the phone doesn’t ring, but we’re actually a lot friendlier than he gives us credit for!)

Alex Levy gets the most out of this cast, and the way he lets Wilder rule the stage as the “dominant male” in the house is a very successful gambit.  He also allows us to see how similar our own personalities, and our own instincts for protection can be to those of our primate cousins.  No small feat, that.