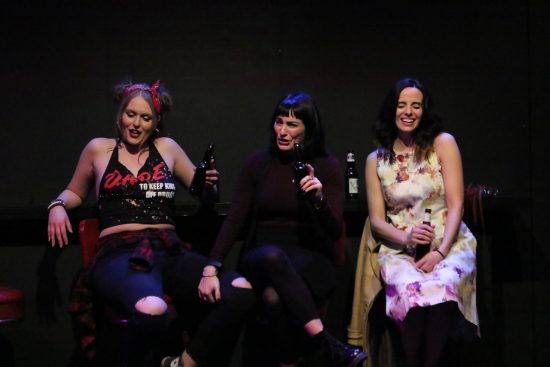 Fells Point Corner Theatre continues their streak of exceptional offerings with the currently running “Trust” by Steven Dietz.  The dramedy is set against the backdrop of the 90’s rock scene.  Complete with live music and tasteful nudity, this is another feather in the cap of the creative teams working in this venerated theatre company.

“Trust” is the story of red-hot rocker Cody, his fiancée Becca, a faded rock star of the 80’s, Leah, and how they, with some help from some friends along the way, navigate the landmines of relationships, both with each other and themselves. Leah, a former rock star from the 80’s, enters the picture. Coincidently, Leah has a history with Gretchen, who is making Becca’s wedding dress. Gretchen’s friend, Holly, lives in the same building as Roy, a DJ who has a crush on her.  Throw them all together and the idea of who can and who cannot be trusted is what this “Trust” is all about.

Dietz uses artifices such as having an actor announce the changing scenes with ‘title’, or an insightful monologue before turning the stage over to the actors in that scene.  Dietz has an impressive command of language and makes astute observations using well-chosen words with the deftness of a maestro.

Director Michael Byrne Zemarel is skillful at moving the action along at a good pace, particularly with entrances and exits that wisely keep the stage balanced visually.  The well-placed musical interludes compliment the actors, all of whom sing well. Some of them even play piano or guitar, lending an extra layer of interest to the production. Speaking of the music, Musical Director Kristen Cooley does a nice job of balancing the voices in the group numbers as well as coaxing some fine performances individually.  Mark Scharf is a standout as the guitar-playing accompaniment and opening act.  Bush Greenbeck’s sets and Chris Allen’s lights both serve the show well.  There is no costumer listed but whoever did them, did them well, especially the runner-strewn black tights and the wedding dress as a work in progress.  Zemarel is as accomplished putting together a backstage team as he is at casting a pitch-perfect ensemble on stage.

And in case there was any doubt about the director’s abilities to relate to the actors, Zemarel plays one of the characters himself.  As Roy, the hapless DJ who falls for the star-chasing younger girl pining for the rock star, he is by turns sappy, savy and always very effective.

Casey Dutt as the aforementioned star chaser turns in a wonderfully pouty performance.  She’s a brassy, overly-confident and gutsy kid who is trying to be a grownup with varying results. Ms. Dutt is all over that, petulant one minute and shameless the next.

Rachel Roth’s Gretchen is one of the most polished of the performers.  She has a laser focus on her character that comes through with an admirable consistency.  A terrific actor whose story-telling ability is on display equally in her monologues and her interactions with the other players, she’s an excellent Gretchen, all repressed desire, until it’s not. Drawing secrets out of her is like getting blood out of a turnip, but once she lets you in, you’re in.

Valerie Dowdle is fearless as Becca, fiancée to the star. She can handle sweetness and light-heartedness as well as any I’ve seen of late, but she can do crazy with the best of them. She can be coy, forthright, annoyingly inquisitive and wonderfully supportive, but has a dark streak that makes her manipulative and capable of violent outbursts.  Dowdle knows just how far to go in each direction.

Laura Malkus has a great singing voice, and I couldn’t help picturing her as Velma in Chicago.  And as Leah, the faded but far from burned-out former rock star she is spot on.  She struts and swaggers, feints and bobs like a prizefighter in scene after scene.  Malkus presents Leah with no apologies, no hesitations, no adornment except an outsized talent and it’s damn near perfection.

I’ve written about David Shoemaker before in previous outings at Fells Point Corner Theatre.  David, give me a break here, wouldja?  I’m running out of superlatives.  I can string a bunch of adjectives together and I no doubt will, but I can sum it up succinctly with four words.  This. Guy. Can. Act.  As Cody, the rock star he’s more laid back than rocked out, but for Shoemaker it works.  And he can summon emotion on demand when needed.  In all honesty, at the performance, I saw there were a couple of brief moments when I would like to have seen him be a little more present in the moment, but hey, he took off his shirt a lot, so the lack of focus might have been mine.  This guy is a master at showing the audience exactly what the character is thinking and more importantly, feeling.

“Trust” deals with themes that are as relevant today as they were 500 years ago and always will be when you’re talking about the delicate dance between humans that fuel our everyday. Love, lust, betrayal, loss, and especially, Trust.  This company has a handle on all of it as written by Dietz.  A totally worthwhile theatrical experience.  And you just might learn something about yourself along the way.