Theatre Review: ‘Watch on the Rhine’ at Arena Stage 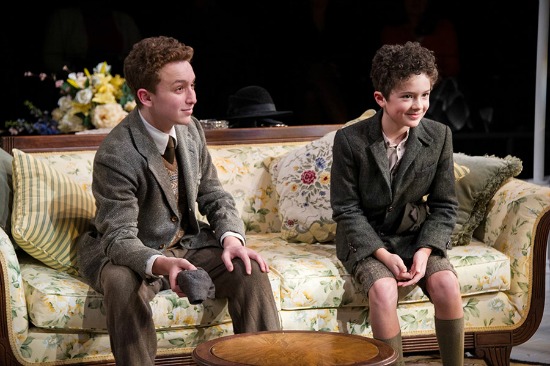 (L to R) Ethan Miller as Joshua Müller and Tyler Bowman as Bodo Müller in Watch on the Rhine at Arena Stage at the Mead Center for American Theater, running February 3-March 5, 2017. Photo by C. Stanley Photography.

Both the Artistic Director of Arena Stage, Molly Smith, and the director of their powerful new production, “Watch on the Rhine”, Jackie Maxwell, emphasize the importance of context, of striving to connect theatre to its context. For “Watch on the Rhine,” its multiple contexts are immediately apparent, set in a divided era of political unrest a stone’s throw from Capitol Hill. Of course, when they decided to do the production it must have been partly inspired by the shifting political and geopolitical landscapes, but they could not have predicted how palpably prescient their choice would become. An ‘almost-gasp’ before a spontaneous round of applause greeted Thomas Keegan’s line in the second act: “You’re political refugees. We don’t turn back people like you.” Keegan must have known he was throwing fuel onto the fire but delivered the line with the informed naiveté that his character David Farrelly requires.

…an exceptional and compelling production.

The action of the play unfolds in a luxurious country house, 20 miles from Washington D.C. in late spring 1940 (a seasonal detail that seems to subtly evoke the time when lambs are sent to slaughter). The matriarch of the Farrelly household, Fanny (played brilliantly by Marsha Mason), is anxiously awaiting the arrival of her estranged daughter, Sara, and Sara’s German family. A certain mystery surrounds Sara’s husband Kurt, and a certain mystery also surrounds the ‘other European,’ Teck, an aristocratic Romanian house-guest who is down on his luck, gambling with Nazis, and beginning to outstay his welcome. Fanny’s son, David (Keegan), has begun to flirt with Teck’s wife, Marthe, who responds in kind. Personal and political tensions increase throughout until a powerful climax and the emotionally devastating conclusion in Act III. Molly Smith has sculpted an exceptional and compelling production.

The play insists on resistance, stylistically and literally. The setting, together with the light humour which opens the play, seems to evoke a comedy of manners while the serious subject matter of increasing tension undermines any sense of this conventional form. There are other oppositions too – the old world against the new, the city against the country, the ‘haves’ against the ‘have-nots.’

Even when it was written, the allusions to a drawing room comedy must have been old-fashioned and some of the dialogue dates the play very specifically, but it is remarkable to realize that when the play was written in 1941 it was topical, not historical. Playwright Lillian Hellman was not drawing on textbooks, but exploring and extrapolating (remarkably accurately) from the world around her, and there is an urgency to the play that seems to reflect this. It remains firmly topical, even now that it is also historical.

Todd Rosenthal’s set is exquisite. As the first image of the show, the brilliant white structure, which articles the room, is even visible from outside the theatre. The opulent interior is offset by the ominous twisting branches that gather beyond the brick walls, threatening to make their way in. This is another of the opposites, the outside against the inside, and Nancy Schertler’s evocative lighting design brings these branches to life at the end of the first half. Judith Bowden’s costumes capture the period of the piece well. David Van Tieghem’s music is at its best when it is integrated into the action onstage, for example, the moment where Kurt, whose hands have been broken by torture, adds an additional, insistent rhythmic layer to the score with single piano notes.

Andrew Long crafts a well-rounded character in the demanding role of Kurt Müller. He is, in turns, kind, charming, uncompromising and emotionally raw. Marsha Mason is perfect as the meddling Fanny who, by her own admission, likes “to disturb folks.” J Anthony Crane captures the manipulative Teck, while Lise Bruneau musters incredible strength and conviction as Sara Müller. The younger cast members, Tyler Bowman, Lucy Breedlove, and Ethan Miller find moments of humour and emotional power beyond their years, understanding that Hellman has given them the responsibility of some of the most poignant moments of the play.

Hellman was blacklisted by The House Un-American Activities Committee. She would come to know the truth of her own line that “it doesn’t pay well to fight for what you believe in.” It does, however, make for exceptional theatre. Hellman was called a genius and a liar and she was probably both. Perhaps today she could be celebrated as a ‘nasty woman.’ Whatever the label, she is extraordinary and is being rightly celebrated as part of Arena Stage’s Lillian Hellman Festival.

The play hinges on two big ideas – truth and home – and insists that the truth must be brought home at whatever cost, which is ultimately what this outstanding production does, in timely and spectacular fashion.

Running Time: Two hours and 30 minutes, with an intermission.

Advisory: Some violence, and adult themes.