1. Caroline, Or Change at Round House Theatre.

“This superb and deeply emotional production is an absolute triumph.” – Kristin Franco

Synopsis: Join us as we present the largest musical in Round House’s history! Set in the heat of the Civil Rights Movement, the Tony-nominated Caroline, Or Change follows a black maid working for a middle-class Jewish family in Louisiana. When a small amount of money goes missing, buried tensions threaten to rip two families—and the struggling Caroline—apart. Loosely based on Kushner’s provocative and personal story, Caroline features a virtuosic score from Jeanine Tesori (Tony Award for Best Original Score for Fun Home) that blends blues, gospel, and traditional Jewish melodies into a magical, show-stopping musical masterpiece. 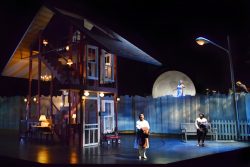 “Adults will appreciate the more subtle humor while children will laugh out loud at the moments of pronounced silliness while learning some valuable life lessons.” –  Liz Ruth-Brinegar.

Synopsis: Based on the Newberry Honor book by Gail Carson Levine. Baby Ella of Frell is given the “gift” of obedience by Lucinda, a misguided fairy, and thus cannot disobey any direct order. Then when tragedy strikes, Ella is reduced to an obedient servant in her new home with Dame Olga. Can Ella find a way to rid herself of the troublesome curse?

3. The Pirates of Penzance at Way Off Broadway Dinner Theatre.

“If you are looking for an evening of light entertainment that will bring a smile to your face, then take a voyage to Frederick see “The Pirates of Penzance” at WOB.” – Mark Beachy.

Synopsis: Set sail with Gilbert and Sullivan’s most popular comic opera, The Pirates of Penzance, a hilarious farce about sentimental pirates, bumbling policemen, dim-witted young lovers, and an eccentric Major-General.  This updated version of The Pirates Of Penzance took New York by storm when it premiered in Central Park in 1980, leading to a subsequent smash-hit Broadway run. 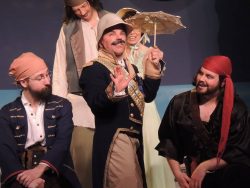 “…a production that captivates and engages with the help of a hugely talented cast and creative team.” – Lynne Menefee.

Synopsis: In this “tight and suspenseful” (Chicago Tribune) adaptation, Charles Dickens’ timeless classic comes bursting to life in a stylized and fast-paced world that is sure to leave you gasping for breath as six actors portray 35 characters. Pip, a poor orphan child in nineteenth-century England, is mysteriously plucked from obscurity by the wealthy and decaying Miss Havisham, changing his life forever. A secretive benefactor, unrequited love, and a series of great expectations plague Pip as he attempts to discover whether people can change who they truly are.

The cast of ‘Great Expectations.’ Photo by ClintonBPhotography.

5. Hooded, or Being Black for Dummies at Mosaic Theater Company of DC.

Synopsis: A dark comedy/satire set in an around Baltimore about growing up black in America, riffing on the Trayvon Martin case, mistaken identity, incarceration, and being black on a privileged college campus.Chisholm’s arresting stylistic turns and outrageous comedic vision demonstrate a unique new voice in the American Theater. The author is currently an MFA Candidate in the playwriting program at Catholic University. Chisholm has already received many awards for his work; this would be his first major production The cast includes a multi- ethnic ensemble of 5 young people and 4 adults. 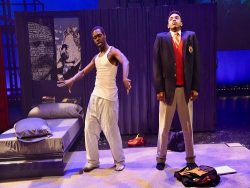 (L to R) Jeremy Keith Hunter as Tru and Keith L. Royal Smith as Marquis in “Hooded, Or Being Black for Dummies” at Mosaic Theater Company of DC, January 25—February 19, 2017. Photo by Stan Barouh.