“…the production at Olney is bolstered by superb atmospherics, creative staging and top-notch performances by a talented ensemble.” – Steve Charing.

Synopsis: DC Legend E. Faye Butler (Arena Stage’s Oklahoma! among many others) joins Phantom alumnus David Benoit for the murder musical of the century! After 15 years in exile, the barber Sweeney Todd returns to Victorian London seeking revenge against the evil Judge Turpin who separated him from his wife and child. Falling in league with the twisted and hilarious Mrs. Lovett – a restaurateur with a shortage of protein for her meat pies – Sweeney embarks on a deliciously chilling rampage to right the wrongs of so many years ago. The award-winning artistic team behind Carousel and How To Succeed… brings this Tony® Award-winning “musical thriller” to life with an exceptional cast and Broadway production values. 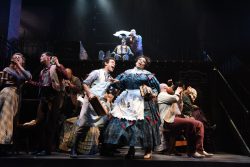 2. The River at Spooky Action Theater.

“…an intricately-woven tale of love, lust, nature and the mysteries of the human condition.” – Andrew White.

Synopsis: A man brings a woman to his secluded fishing cabin. Under the new moon, their pursuit is sea trout – and an instant of perfect love and primal desire, elusive as the one that got away. This woman, this moment, is the one: mythical and mysterious as The River itself. 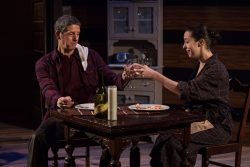 Jeff Allin as The Man and Emma Jackson as The Woman. Photo by Tony Hitchcock.

3. Our Town at Annapolis Shakespeare Company.

“…great humor and control hypnotizing the audience to focus on his every move and word….” – Raychel Harvey-Jones.

Synopsis: Thornton Wilder’s OUR TOWN – Winner of the 1938 Pulitzer Prize for Drama and described by Edward Albee as “…the greatest American play ever written,” the story follows the small town of Grover’s Corners through three acts: “Daily Life,” “Love and Marriage,” and “Death and Eternity.” Narrated by a stage manager and performed with minimal props and sets, audiences follow the Webb and Gibbs families as their children fall in love, marry, and eventually—in one of the most famous scenes in American theatre—die. 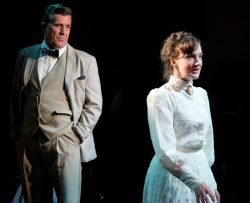 “The play is inventive, derivative yet original, playful yet moving.” – Barbara Trainin Blank.

Synopsis: The Queen is dead. After a lifetime of waiting, Prince Charles ascends the throne with Camilla by his side. As William, Kate and Harry look on, Charles prepares for the future of power that lies before him…but how to rule? Written primarily in Shakespearean blank verse, this modern history play explores the people underneath the crowns, the unwritten rules of Britain’s democracy and the conscience of its most famous family. 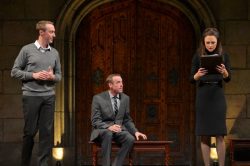 5. Blues in the Night at Creative Cauldron.

“All four of the cast members delivered powerful performances, paying homage to blues icons and doing them justice.” – Maria Materise.

Synopsis: Blues in the Night, a scorching, Tony-nominated musical, captures the soul of the blues. Featuring twenty-six hot and torchy numbers that tell of the sweet, sexy and sorrowful experiences three women have with the lying, cheating snake of a man who does them wrong, it will leave you energized, inspired, and ready to wail! The interweaving stories are defined through glorious songs from Bessie Smith to Duke Ellington, Johnny Mercer, Harold Arlen, Jimmy Cox, Ida Cox and more. 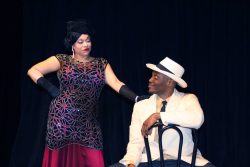