Synopsis: After arriving in the City of Angels, an aimless young man catapults to movie stardom and into Hollywood’s sleazy celebrity culture. Banking on his fame (and name), he is selected to appear on Broadway in Hamlet. Given full casting approval, he embarks to New York City to seek out his Ophelia and encounters his muse and his match —a young evangelical Christian woman set on getting the role… and saving his life. “H2O” transports audiences into the reclusive, madcap world of Jane Martin’s drama/comedy/love story about self-destruction, notoriety, and the dark journey to purity and salvation. 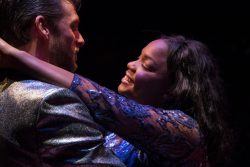 Robbie Gay as “Jake” and Krenee A. Tolson as “Deborah.” Photo by Katie Simmons-Barth.

2. The Taming of the Shrew at Synetic Theater.

“… a vibrant carousel of color and laughter, with a laser-focused artistic vision.” – Norah Dick.

Synopsis: The main plot depicts the courtship of Petruchio and Katherina, the headstrong, obdurate shrew. Initially, Katherina is an unwilling participant in the relationship, but Petruchio tempers her with various psychological torments—the “taming”—until she becomes a compliant and obedient bride. The subplot features a competition between the suitors of Katherina’s more desirable sister, Bianca. The play’s allegedly misogynistic elements have become the subject of considerable controversy, particularly among modern scholars, audiences and readers. 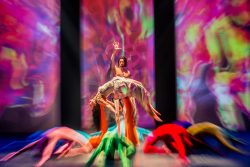 Synopsis: As charming as he is evil, Richard III marries and murders his way to England’s crown. Appointed protector of his nephews, the two child princes who are the heirs of the late Edward IV, Richard wrests the throne for himself.  He rules from 1483 until his death in 1485 in the Battle of Bosworth Field.  Captivating and horrifying, the play is Shakespeare’s concluding chronicle of the Wars of the Roses.  To great acclaim, we last performed Richard III as a movable play with a WWI setting in the ruins in PFI HIstoric Park. For our 15th Anniversary, we’ll re-mount our popular Richard III indoors with fresh energy. We’re thrilled that Resident Acting Company member Vince Eisenson will reprise his role as England’s last king of the House of York. 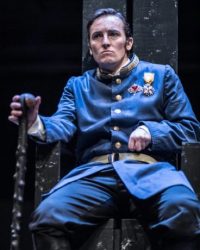 “The small cast, coupled with the intimate performance space, makes the audience feel like a part of the action…” – Kristin Franco

Synopsis: The two rooms of the title are a windowless cubicle in Beirut, where an American hostage is being held by Arab terrorists, and a room in his home in the United States, which his wife has stripped of furniture so that, at least symbolically, she can share his ordeal. In fact the same room serves for both and is also the locale for imaginary conversations between the hostage and his wife, plus the setting for the real talks she has with a reporter and a State Department official. 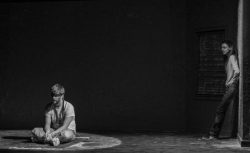 Synopsis: Fells Point Corner Theatre is proud to present Trust by Steven Dietz. A rising star and a faded one. A radio DJ. A Bohemian. Guitar picks, pick-ups and wedding dresses waiting to be worn. In a fast-paced, grungy grind, how can anyone be trusted when temptation trumps all? 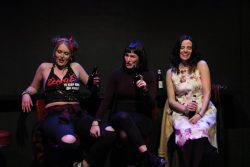