Ballet Review: ‘Giselle’ by The Washington Ballet at The Kennedy Center’s Eisenhower Theater 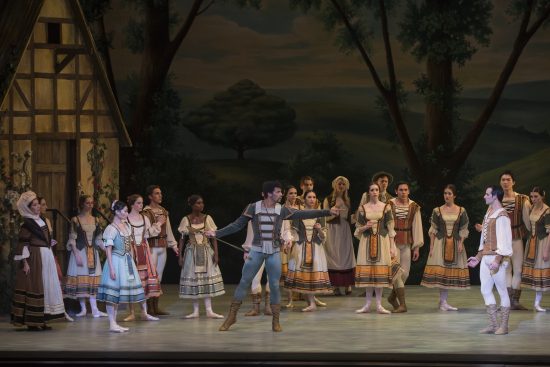 Maki Onuki, Gian Carlo Perez and Rolando Sarabia perform in the opening night of “Giselle” at the Kennedy Center.

Some say that the only force in this world more powerful than death is love. The story of Giselle and her tragic love epitomizes this belief in The Washington Ballet’s impressive new staging. (Performers vary based on performance)

“Giselle” opens in a small, medieval village in what is now western Germany. Count Albrecht (Brooklyn Mack), a young, handsome nobleman, becomes enamored of the titular heroine. Giselle (Eunwon Lee) is full of youth and joy, but she suffers from a heart condition which gives her a delicate constitution. Albrecht disguises himself as a peasant and proceeds to woo Giselle. Hilarion (Corey Landolt) regards this newcomer with suspicion, as he too loves Giselle. Berthe, Giselle’s mother (Michele Jimenez), also disapproves of Giselle’s regard for “Loys,” as Albrecht calls himself, as she fears that her exuberant love will cause her to over-exert herself and come to harm.

…The Washington Ballet delivers a beautiful rendition of a classic ballet.

A noble party comes to the village, and Albrecht flees, knowing he would be recognized. A noblewoman names Bathilde (Morgann Rose) takes notice of Giselle and honors her with the gift of a necklace. However, when Albrecht returns, Hilarion produces proof of Albrect’s true identity, as a nobleman betrothed to Bathilde. Heartbroken, Giselle goes into a fit and her heart ultimately gives out.

Act II begins with Hilarion grieving at Giselle’s grave, bitterly lamenting her life being so tragically cut short.  He then encounters the Wilis- a group of the spirits of young women who died because of the pain caused by unrequited love. They have come to collect Giselle’s spirit and indoctrinate her into the Wilis, who exact their vengeance upon any man unlucky enough to cross their path. Albrecht sees her rise as he comes to place flowers on her grave and begs her forgiveness, which she grants. However, when she goes to join the Wilis, he cannot let her go and follows. The Wilis have set upon the horrified Hilarion, forcing him to dance to his death. They then turn upon Albrecht. Only the power of Giselle’s love sustains him until morning, when the Wilis are forced to depart. Not only is Albrecht’s life spared, the process of supporting him has allowed Giselle to let go of the anger and bitterness that control the Wilis and she is able to break free of them and find peaceful rest.

This powerful and iconic ballet does not disappoint ballet classicists and new aficionados alike. The very first impression made as the curtain rises is the spectacular backdrop, which is a two story high work of art. Full of lush greens and earthy colors, it brings Giselle’s tiny village to life (scenery by Simon Pastukh). This vibrancy is compounded by the gorgeous costumes, which are both aesthetically pleasing and really bring to mind Germany in the middle ages (costumes by Galina Sollovyeva). The dancing is impeccable and clean. Lee infuses Giselle with a joy that only young love can induce and both Mack and Landolt deliver strong performances as the men who can’t help but love her.

These performances become even more impressive as the joie de vivre of the first acts fades into a much colder world. Gone are the bright colors, both in the set and costumes; the background is now a dark, cloudy night and the costumes are only a stark white and forlorn blues. The finishing touch is the inspired use of lighting – one of the most beautiful moments in the ballet is when dawn is breaking; an effect almost exclusively achieved by subtle and deft lighting changes (lighting by Robert L. Fabrizio.) The change in the leads is also remarkable. Lee provides an amazing turn; the buoyancy of the first act has disappeared and Lee delivers a markedly different performance. Her dancing becomes much more mature, with a forlorn yearning in every movement. Landolt’s anger quickly turns to fear and surrender, and Mack’s carefree dancing is gone, replaced by regret and desperation. The Corps also strike a formidable line as the Wilis, at turns terrifying and sympathetic.

On top of the already formidable artistic achievements exhibited in this performance, the presence of the live orchestra, led by Guest Conductor Charles Barker, takes it over the top. The live music was the final piece in making this ballet come to life and soar.

Overall, The Washington Ballet delivers a beautiful rendition of a classic ballet. It is a complete artistic package that can be appreciated on multiple levels.

While the final performance of “Giselle” has been performed, click here to find more information about upcoming performances by The Washington Ballet, click here.