News: Help Save the NEA 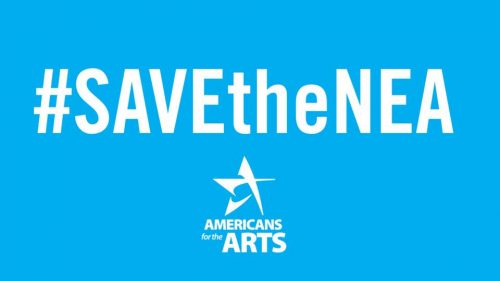 Eliminating the NEA would be a devastating blow to the arts in America. For more than 50 years, the NEA has expanded access to the arts for all Americans, awarding grants in every Congressional district throughout all 50 states and U.S. Territories as well as placing arts therapists in 12 military hospitals to help returning soldiers heal from traumatic brain injuries. The NEA is also an economic powerhouse, generating more than $600 million annually in additional matching funds and helping to shape a $730 billion arts and culture industry that represents 4.2% of the nation’s GDP and supports 4.8 million jobs.

The federal appropriations process does not end here. We now begin a concerted grassroots effort to convince Congress to #SaveTheNEA. Here are the actions you can take right now:

1. The most important thing you can do is to take two minutes to send a customizable message to your elected representatives in Congress and urge them to oppose any attempt to eliminate or cut funding to the NEA.

2. Post on Facebook and Twitter to help rally national support to save the NEA. There is strength in numbers and your social media friends can help.

We’ll be at Arts Advocacy Day next week, helping to ensure there is a strong voice in support of the arts. In the meantime, make sure to watch our social media accounts to stay up to date on the latest news. Find us on Facebook. Find us on Twitter.

Maryland Citizens for the Arts Staff