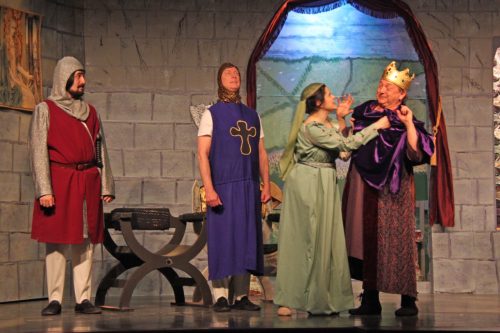 The talented cast of ten keeps the audience entertained while director Rich Amada’s comic sense imbues the script with sight gags that emphasize the many anachronisms and improbabilities of the plot.

This deceptively spare production gives way in Act II to a Medieval Madhouse where even a toothbrush can be multi-tasked. Do not look for knightly dignity in Ted Culler’s Sir Launcelot [sic], or Scott Stofko’s Sir Sagramor, while Emily Golden’s slinky seductress Morgan Le Fay and Colin Davies’ bloodthirsty Merlin are all that a classicist could desire in theater villains.

Mike Dobbyn is the befuddled efficiency expert and engineer, Hank, oblivious to the charms of Le Fay or Sandy (Kirstin Apker) while on guard against the machinations of Queen Guenever [sic] (Angelene LeBlanc) as he brings Clarence (seventeen year-old Olivia Parker) and Elaine (Brooke Angel) into his 20th Century toiletry empire – and a charmingly henpecked and befuddled King Arthur (Jim Pearson) looks on in disbelief.