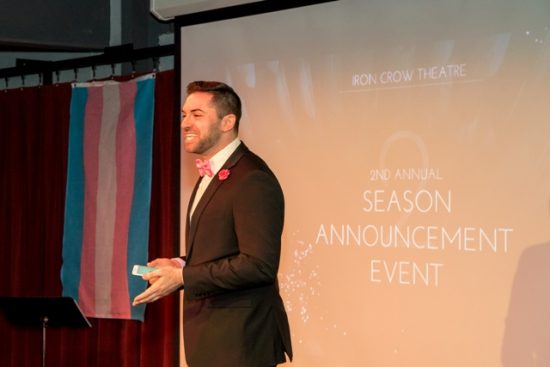 Iron Crow Theatre, Baltimore’s only professional queer theatre company, announced its new season line-up on March 19 at a reception at the Motor House in Baltimore’s arts and entertainment district.

In addressing a crowd of over 100, Sean Elias, Iron Crow Theatre’s Artistic Director and Chief Executive Officer, touted the growth of the company and the fact the four shows from the current season garnered 32 award nominations. He also introduced Lindsey R. Barr as Managing Director, Jonnell Paschall as Company Coordinator, Ann Turiano as Director of Education and Literature.

For the upcoming season, dubbed the “Season of Identity,” Iron Crow will present: “The Cradle Will Rock,” “Rocky Horror Show,” “The Goodies,” “Cloud 9,” “Corpus Christi,” and “The Laramie Project.” There will also be an educational tour geared to local middle school students called “Queer?!”

“The 17/18 ‘Season of Identity’ explores who we are as individuals, as people, and as a nation, revealing the possibility, fluidity and oppression we all encounter in the construction of ‘who I am’ and ‘who we are,’” said Elias, in a statement prior to the event.

“This season is in direct response to our current socio-political environment. It’s an invitation to not only explore gender, sexual, racial and religious identity, but to critique it, to understand it, change it, play with it, hide it, or reveal it. We also strongly believe in the necessity and importance of equitable inclusion and representation at Iron Crow Theatre. We look forward to honoring this commitment in all aspects of creation.”