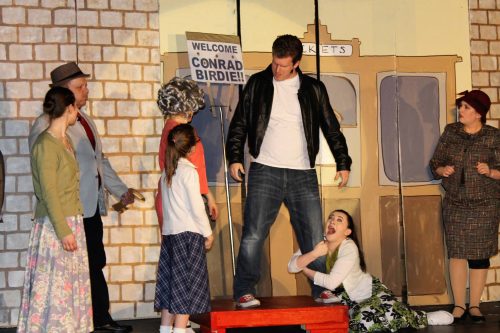 Artistic Synergy is one of those Little Theatre Engines That Could.  And Does.  They keep chugging along despite daunting odds and challenging circumstances.  Their latest offering is “Bye Bye Birdie,” now running until March 19th.  And while the daunting odds and challenging circumstances are not entirely overcome, they manage to “Put On a Happy Face” more often than not.

“Bye Bye Birdie,” first produced on Broadway in 1960, tells the tale of one Albert Peterson, wanna-be talent manager and songwriter extraordinaire, his secretary Rosie, his number one property, Conrad Birdie (about to be inducted into the army), and the MacAfee family – especially the daughter, Kim.  When Albert, Rosie, Conrad, (and later, Albert’s mother, Mae) descend on Sweet Apple, Ohio, to stage a publicity stunt with Conrad to give One Last Kiss to the president of his local fan club, Kim MacAfee, it doesn’t go nearly as smoothly as Albert had planned.

Director Jeff Baker has made some excellent cast and crew choices, which mostly land well in a well-paced production.  But I have to say, some of those choices were a little baffling, like Birdie and Rosie’s hair styles and costumes. There is no Music Director listed, but if a company chooses to use canned tracks instead of a live pit band or orchestra they should make sure the sound system is sufficient to balance the music with the live voices. This one sounded either tinny or overbearing too much of the time.

Choreographer Suzy Hasselbusch shows a clever command of how to marshal 26 bodies around a less than commodious stage, with a decent nod to the moves that ring true to the spirit of 60s teens.  Standout dance numbers were “The Shriners’ Ballet” and “The Telephone Hour.” The set is nicely rendered and manages to convey a train station, a Midwestern kitchen, a bar and the steps of City Hall. The Sarah May handled the lighting design as well as could be expected with those aforementioned “challenging circumstances”  – mostly the performance space in the basement of a church. Costumes by Amy Rudai also worked fine, though a little under done here, and a little over done there.

The chorus is on point, though some of them should be reminded to stay in character for the whole scene, and stop scanning around the audience (who were they looking for?  Mom?  Dad?  Uncle Bill?) Olivia Winter is adorable as Ursula, full of pep and teenage focus.  Dorian Smith is going to be a heartthrob as soon as his voice catches up with his body and is excellent as Hugo Peabody.  Jennifer Hasselbusch and Stanton Zacker are in fine voice as the MacAfees.

Matt Peterson plays Conrad Birdie and with a perfectly nice voice and a head full of glorious hair, I would have liked to seen even more of his Elvis Presley swagger, on whom the character is based.  He has solid acting chops. Hunter Lubawski is delightful as Kim MacAfee, with a clear, bright soprano and a grin that’s as infectious as it is charming.

Seth David is surprisingly light on his feet and sounds grand in the role of Albert Peterson. Alana DiSabatino is a Rosie with terrific comedic timing, able to deliver a zinger with a deadpan face and a flip of her way too much hair.  The standout of the evening is hands down Melissa Broy Fortson as Mae.  She is a comedic wonder and kept the audience in stitches with her delivery and body language as the Mother of the hapless Albert.  She’s worth the price of admission and is more than enough reason to see this show.

It is so important that theatre companies like Artistic Synergy are encouraged to do what they set out to do – provide Baltimore audiences with entertaining productions, and give the members of the community an opportunity to create their art. Go see “Bye Bye Birdie” and remember – these folks are doing their best to give you a good time.  They’ll hopefully get better with each production.  Maybe they can find alternate housing soon.  Either way, I intend to revisit whenever I can.