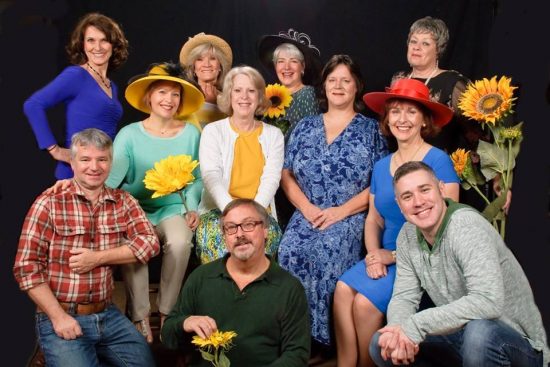 Move over Dorothy, Rose, Blanche, and Sophia from TV’s “The Golden Girls” because the “Calendar Girls” are in town and ready to bare it all at the Colonial Players of Annapolis though March 11th .

Based on true events, Tim Firth’s play takes place in Yorkshire where members of the Women’s Institute plan a fundraiser in order to help support the Leukaemia Research Fund.

It all begins when Annie’s husband John (Rick Estberg) dies of leukaemia.  Her best friend Chris has the offbeat idea of selling an “alternative” calendar to raise funds for a new settee in John’s honor in the local hospital waiting room.

I highly recommend scheduling this play on your social calendar.

Directed with heart and soul by Colonial Players veteran Debbie Barber-Eaton, “Calendar Girls” features a dedicated troupe of performers willing to bare it all on stage, both physically, spiritually, and emotionally.

The best compliment I can give Marti Pogonowski who plays the role of Annie is that she doesn’t seem to be acting at all.  She looks very comfortable and natural on stage, whether she is mourning over the loss of her husband or fighting with her best friend, Chris.

Laura Gayvert could have easily played the role of Chris in an over-the-top manner.  Instead, she creates just the right balance of naughty and nice.  Who else could have convinced these middle aged ladies to appear nude on a calendar with such grace and dignity.

Karen Lambert has many layers to her role as Ruth, the quiet lady who is eager to please; even wearing a home-made rabbit costume.  But what secret does she hold?  All is let out in the second act in a highly explosive and entertaining exchange between her and Elaine (Rosalie Daelemans), a makeup artist.

Adding to the comedy is Jason Vellon who plays the role of Lawrence the photographer as well as Liam the director of the washing powder commercial.  Jason’s facial expressions during the wild and wonderful calendar photo shoot are priceless!

The stage props designed by Joann Gidos, costumes designed by Fran Marchand and Paige Myers, set and floor designed by Edd Miller, sound designed by Sarah Wade, and lighting designed by Shirley Panek, all added nicely to the quality of the production.

“Calendar Girls” leaves you with the message of encouraging oneself to be brave and take chances, no matter what age.  I highly recommend scheduling this play on your social calendar.

Advisory: Mild adult themes, some profanity, and some brief moments of partial nudity.