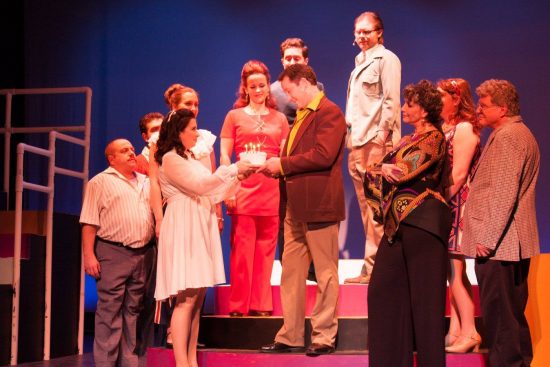 The cast of ‘Company’ at Port Tobacco Players.’ Photo courtesy of PTP.

Stephen Sondheim’s lyric, “Why look for answers when none occur?” can sum up his concept musical, “Company” now playing at the Port Tobacco Players in La Plata, MD through April 2nd.

The story is centered around Bobby, a single man with no emotional commitments who upon turning 35 begins to reassess his life by looking deeper into the lives of his married friends and his girlfriends.

Overall, director Brooke L. Howells has staged a friendly “Company” that is worth a visit.

Everyone in the cast of 18 gets to shine.  From large group numbers such as “Company” to small, intimate songs such as “Sorry-Grateful,” the show was successful because of their harmonious vocals and their working together as an ensemble.

You really wanted actor Christopher Overly as Robert to find a woman that he truly cared enough for to settle down and get married.  His tender, yet desperate vocals on “Marry Me a Little” exhibited how his character is afraid of NOT getting married while his friend Amy is afraid to get married.

Tara Waters is beautifully neurotic as Amy, a Catholic woman who experiences a classic case of cold feet on her wedding day.

Jenete St. Clair as Jenny gives the most impressive vocal performance of the evening with her operatic sounds during the song “Getting Married Today.” The comedic inflections that she adds to the lyrics adds to the pleasing sounds of her classically trained voice.

Carmel Ferrer as Joanne steals the show with her rendition of “The Ladies Who Lunch.”

Let’s not forget about the stars beneath the stage as well.  The lavish 24 piece orchestra, led by James D. Watson, brings Sondheim’s music to life with it’s spirited players.

Overall, director Brooke L. Howells has staged a friendly “Company” that is worth a visit.

Running Time: 2 hours and 25 minutes with one 15 minute intermission.

Advisory: Adult themes and some profanity.

“Company”plays at the Port Tobacco Players in La Plata through April 2.  For more information, visit online.