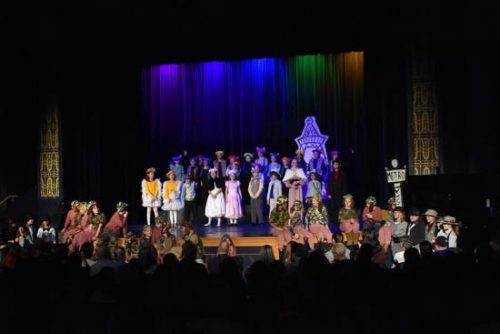 “Everybody wants to be a cat… because a cat’s the only cat who knows where it’s at.” And all the cool cats are at Carroll Arts Center, which is currently presenting Disney’s ‘The Aristocats Kids.’   Directed by Tabetha White, the show features over 50 talented young performers who dance and sing to some great feline tunes.

It’s a purrrfect way for the family to spend some time together.

Based on the 1970 Disney film, the story follows four ‘Aristocats’ — Duchess (Rebecca Sprinkle) and her kittens, Toulouse (Aidan Somerville), Marie (Elsie Kate Aukerman), and Berlioz (Luke Nowosielski) — who live in Parisian luxury with Madame (Olivia Sprinkle). The cats are reluctantly cared for by Madame’s butler, Edgar (DJ Goodman).   But when Edgar hears that Madame will be leaving her fortune to the cats, he drugs them and plans to abandon the cats in the countryside.

Fortunately, Edgar’s plan is foiled by an army of dogs, led by General Napoleon (Daniel Russell). Later, Duchess and the kittens meet Thomas O’Malley (Zane Haller), an alley cat, who offers to guide her and the kittens back to Paris. After a rousing musical session with O’Malley’s hepcat friends, they make their way to Madame’s house where Edgar puts them in a crate and attempts to ship them to Timbuktu. But as with every good Disney film, it all ends happily ever after, with Madame deciding to open her home to all the stray cats in the neighborhood.

As Madame, Olivia Sprinkle is graceful and chic.  Rebecca Sprinkle, who plays Duchess, shows her maternal side, taking good care of her three playful kittens and leading them safely back to Paris.  Goodman does a great job channeling evil as Edgar while Russell aptly leads his large army of dogs.

The cast wears a variety of hats with cat or dog ears to differentiate the parts. It’s easy to tell General Napoleon’s army of dogs – all dressed in camouflage and dusty pink – from the scat cats who wear flat caps and grays and blacks. The Aristocats look Parisian chic with their fancy dresses and fur jackets. And the geese, Amelia (Jessica Gogol) and Abigail (Colleen Dunne), are instantly recognizable with yellow leotards, big sun hats, and lots of feathers.

The scenery consists of hand-drawn monuments – including the Eiffel Tower and Arc de Triomphe –so we know we’re in Paris.   The drawings add an element of childlike fun to the show. Other cute touches include the tails of all the kittens sticking out of a straw basket when Edgar kidnaps the cats and the Aristocats appearing behind a large drawing of a crate so it appears as if they’re inside the crate about to be shipped away. When the cats are transported to the countryside and then make their way back to Paris, actors holding signs simulate movement.

The show is quick – lasting only about 40 minutes – and has non-stop action, singing, and dancing so there’s never a dull moment. It’s a purrrfect way for the family to spend some time together.