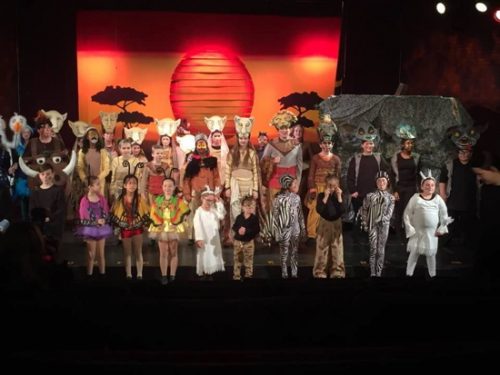 The cast of ‘Disney’s The Lion King, Jr.’ Photo provided by Performing Arts at CCBC.

Hakuna Matata. There are no worries when watching “The Lion King,” presented by Children’s Playhouse of Maryland at CCBC Essex, because the show is just that good. From the beginning, the beloved Disney classic will astound you with amazing costumes, a beautiful set, great singing voices, wonderful choreography, and a number of special effects.

From the start, when Rafiki (Nyani Hawkins) chants in Zulu (which literally translates to ‘Here comes a lion, Father’), we know we’re in for a treat. Somehow, the sun on the set rises over the beautiful African grasslands, and a giraffe (Erin Acerno) on stilts makes her way across the stage. From there, a whole herd of animals parade down the aisles of the theatre, bringing us into the show. And you can’t help but be amazed by the sheer number of different animals on stage, each moving to their own unique rhythm – even an elephant and a rhino which are manipulated by more than one performer. The zebras (Ethan Holler, Allyson Gray, Bella Comotto) are jumping, the gazelles (Royce Hartin, Maia Vong) are galloping, the butterflies (Nora Acerno, Amy Claudio, Molly Foggo) are fluttering their wings, and even the birds (Noah Walter, Brooke Henshaw) are soaring overhead. Pride Rock appears, large and looming, and Mufasa, as king of the Pride Lands, is able to climb up on top to see over his kingdom.

From the beginning, the beloved Disney classic will astound you with amazing costumes, a beautiful set, great singing voices, wonderful choreography, and a number of special effects.

We all know the story. The lion cub Simba (Sammy Jungwirth), the son of King Mufasa (Sam Whitman) and Queen Sarabi (Emily Ricci), will someday rule as king over the Pride Lands of Africa. However, Mufasa’s younger brother, Scar (Dylan Morrison), wants the throne and plots to get rid of Mufasa and Simba so he can become king. When Scar murders Mufasa (complete with a fall from grace involving strobe lighting), he convinces Simba that he’s responsible for the death. So Simba goes into exile in the jungle, where he eventually comes to terms with his inner self and is ready to reclaim the throne.

The musical is much the same as the movie, but with some additional songs which reflect an authentic sense of tribal rhythms. These new songs are just as good as the originals we all love including “He Lives in You,” a song which reminds Simba that his father is always with him, and “Shadowland,” a haunting tune sung by Nala (Grace Glennon) who must leave her pride to save her home. The cast sings these complex words and melodies with ease, and there are some outstanding singing voices, notably Simba (Jules Einhorn/Sammy Jungwirth), Nala (Glennon), and Pumbaa (Sam Patterson).

But in my view, the best songs are the big ensemble numbers. In “I Just Can’t Wait to Be King,” the cast dons bright tie dye shirts while spiral lighting is projected on the walls. Simba steps on the backs of the actors so he can ride on an enormous ostrich. Truly amazing. Thankfully, we have this lighthearted song since the next scene is in the elephant graveyard, which is all creepy fog, an eerie bone structure, and laughing hyenas. In “He Lives in You,” the ensemble comes down the aisles wearing black and holding flashlights as a myriad of stars are projected throughout the theatre. Members of the cast leap and twirl with outstanding choreography. The best part is when members of the ensemble come together to create an enormous astral projection of Mufasa.

The words and jokes from the movie are kept intact; they add a lightness to an otherwise sad and haunting story.   Scar admits ‘I got the lion’s share of brains but when it comes to brute strength, I’m at the shallow end of the gene pool’ while Nala comments that she and Simba ‘better not be going any place lame’ and need to figure out how to ‘ditch the dodo’. And of course, there’s Timon (Ryann Nicole Reich) and Pumbaa (Sam Patterson), who always add their own touch of humor (in the case of Pumbaa, mostly with jokes about gas).

But I can’t forget about the costumes.  Each and every character is completely transformed. The lionesses are regal with their flowing scarves in animal prints and huge lioness heads on top of their own. The hyenas are sinister with their tattered vests and mocking hyena faces above their own. And Mufasa is truly the king with a huge tribal African mask above his head. This use of headpieces which look like the animals make all of the characters seem larger than life and make the show truly outstanding.

At the end, we’re just where we began. The ‘Circle of Life’ repeats itself as Rafiki holds up Simba and Nala’s new baby lion cub. This musical is so good, it makes me want to repeat that ‘Circle of Life’ all over again.  And I’m not ‘lion’.