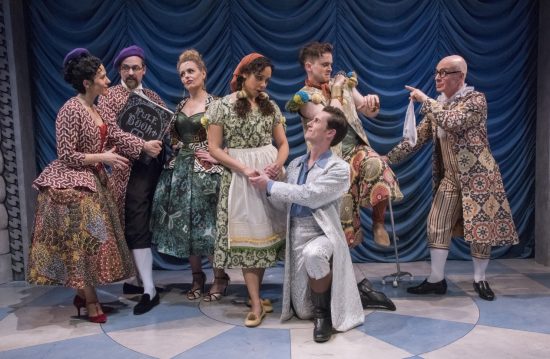 “Fickle: A Fancy French Farce, ” now playing at the Olney Theatre Center through March 26, is a new adaptation by Meg Miroshnik of “The Double Inconstancy,” a comedy from 1723 by Pierre Carlet de Chamblain de Marivaux.

It’s a fairy-tale, of sorts for adults. There is a Prince (Christopher Dinolfo) who just became an adult. (Not that he was behaving that way.) He sleeps all day and plays games. Still, he is a Prince that is supposed to live by the Rule Book and, according to Chapter 10, Section 5, Subsection 11C, “The Sovereign must marry one of his subjects,” but cannot “take that heart by force or else…”

…filled with plenty of delightful cheesy gags and surprises.

The Prince fancies Silvia (Kathryn Tkel) and has her kidnapped from her village and taken to a “super-fancy room” where he hopes to marry her. Trivelin (a commanding Marcus Kyd) tries to calm her down by saying that she wasn’t kidnapped and that she received “an enhanced invitation.”  Trouble is, Silvia is engaged to Harlequin (an energetic Andy Reinhardt).

The “super-fancy room,” designed by Charlie Calvert is absolutely pleasing to the eye.   A main blue curtain and two side curtains open to reveal lots of surprises, including The Lord (Mark Jaster) singing a ditty in French, a pink gloved hand taking props away from performers, a room in the palace featuring a pink chandelier, and also, well, I can’t give all the surprises away!

Gorgeous lighting design by Nancy Schartler has different colored lights bouncing off of a shimmering wall in the palace. Look for dazzling bright blues and pinks. Footlights also give the grand appearance of an old theatre.

Christopher Dinolfo as The Prince keeps the running gag of him as the method actor who likes to embody Robert De Niro, fresh and bouncy every time he says, “You talkin’ to me?”

Kathryn Tkel as Silvia has an attractive strength that brings The Prince willingly to his knees.  The play has her sing brief moments from other strong female fairy-tale roles to the delight of the audience which is in on the joke.

Being an admirer of Mark Jaster, I would have liked to have seen more of him on the stage.  But as they say, leave the audience wanting more!  Here, I enjoyed seeing Mark Jaster as The Lord with his cane and large black circular-rimmed glasses, waving his white handkerchief about, hoping to finally win a bride, no matter what the cost.

Other roles in the play include Alyssa Wilmoth Keegan as the level-headed Flaminia, an assistant and Tonya Beckman as Lisette, the “innocent,” yet “alluring” femme fatale.

Overall, director Eleanor Holdridge has given us a fancy French farce that delivers an all around appealing play, filled with plenty of delightful cheesy gags and surprises.  See the play to find out whether or not it has a fairy-tale ending.