Theatre Review: ‘From The Mouths of Monsters’ at The Kennedy Center 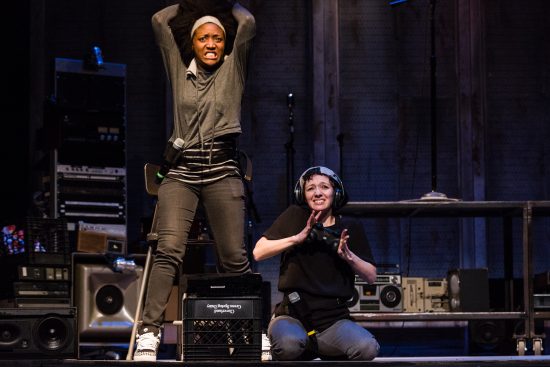 How do you channel your truth? What actions do you take to free your thoughts? Who would you like to become? These were just a few questions explored in Saturday’s performance of “From The Mouths of Monsters.” Written by award-winning playwright Idris Goodwin and directed by Dougie Irvine, “From The Mouths of Monsters” takes inspiration from Mary Shelley’s nearly 200-year-old novel Frankenstein and blends in the complexities of modern-day adolescence. The play touches on a variety of topics, ranging from long-distance friendships to sibling rivalry to the absence of a parent.

You’ll leave inspired to unravel a new layer of yourself…

“From The Mouths of Monsters” follows the story of 15-year-old Michelle (Shannon Dorsey), a “quiet girl” who sinks into her shyness, wishing she could be as successful as her friend Penelope and envying the confidence classmate Harriet emanates (Tia Shearer). The audience follows Michelle as she begins to realize that she too has power that simply needs to be unleashed using the right outlet. As she begins to dismiss self-doubt and hesitation, Michelle transforms into the slam poet she saw within herself. But after her first show, Michelle’s power takes a turn as she awakens the dead and crosses the line to a darker side of herself.

The play showcases versatility and a wide range of emotions from its two-person cast. Dorsey was phenomenal at expressing embarrassment, confusion, anger and awe. Her fluidity moving from one emotion to another made her character particularly convincing. Shearer’s acting was equally as superb as she switched from one character to the next with a simple costume or prop addition. Her portrayal of Michelle’s brother was the most comedic and seemed to be the most relatable character for the packed audience.

It was not surprising to hear during the post-performance discussion that both Dorsey and Shearer had workshopped with Goodwin and Irvine as they worked on the play. Their involvement in the play’s transformation, from pitch to final script, speaks to their ability to bring the play to life.

While the scenes and Shearer’s characters shifted often, Set Designer Luciana Stecconi, Sound Designer Christopher Baine and Lighting Designer C.C. Gould made it simple for the audience to follow along. Michelle’s journey was amplified literally with microphones, tapes players, stereo systems and even a gramophone. I found it especially entrancing to watch the actresses quickly move around the stage to flip the switches or needle on and off. Colored lights matched the tone and volume of sound, which intensified the experience, particularly towards the end of the play.

The John F. Kennedy Center for the Performing Arts’ world premiere of Goodwin’s play is electrifying for the young in age and at heart. The plot highlights the multilayered questions we start asking ourselves in adolescence and continue to fuss over time and time again. You’ll leave inspired to unravel a new layer of yourself, aspiring slam poet or not!

“From The Mouths of Monsters” ran through March 12, 2017, in the Family Theater at the John F. Kennedy Center for Performing Arts in Washington, DC. For more information click here.