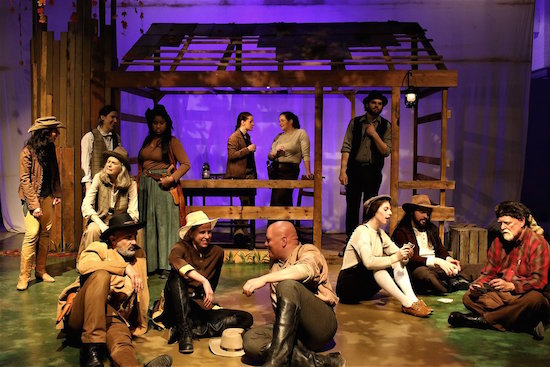 The cast of ‘Henry The Fifth.’ Photo provided by Cohesion Theatre Company.

Cohesion Theatre Company offers up a unique version of William Shakespeare’s “Henry V,” modestly retitled as “Henry the Fifth.” I have heard Shakespeare’s prose and verse recited in many tones and literations – Original Pronunciation, English Pronunciation, American Pronunciation – but Shakespeare in Old Wild West / Appalachian / Country twang (1882 Tug Valley- to be exact) is something new and different.

In the extremely eloquent words of one of the two directors, Alice Stanley (Jane Jongeward is the other), they wrote, “While we as a culture know Henry V for King Henry’s speeches and its treatment of the glory of battle, we also condemn the Hatifield and McCoy feud as ‘backwoods,’ irrational, and offensive. Why do we allow the support of institutions such as monarchy to legitimize violence?”

It works, and the story works as well…

You have the two opposing sides, one wants to keep its land and ruler (France), and the other, England’s Church, wants King “Hal” to force his claim as the rightful ruler of France. Henry V is the final part of a tetralogy, preceded by Richard II, Henry IV, Part 1, and Henry IV, Part 2. We watch Hal grow-up in the earlier plays, and here he finally becomes the heroic ruler that all of England hoped for.

Zach Bopst as the title character does an exceptional job. Even with his country accent and western garb, Bopst projects a regal carriage and poise.  Although Henry is reluctant to go to war with France, he resigns himself to the coming battle, because he believes God is on his side. Bopst delivers the famous St. Crispin Day’s speech with rousing qualities, even though his back is to the audience throughout the entire speech!

Meghan Stanton as The Duke of Exeter, Henry’s uncle and his trusted advisor, has no problem in this statesman role. Stanton is easy to understand, and her care for Henry is evident in her mannerisms and tones.

Micaela Mannix has a few roles, but she stood out as Katherine, Henry’s French bride-to-be. As Katherine is only 14, Mannix does a great job as a young girl not quite willing to marry Henry, an Englishman.

Lyle Smythers has fun playing Pistol, a character who makes appearances throughout the tetralogy. Smythers plays up Pistol’s drunken cowardice to the delight of the audience, who laughed almost every time he is on stage.

Caitlin Carbone plays two roles: The Earl of Cambridge and, most memorably, The Dauphin, who is next in line for the French throne.   He holds a low account of Henry, and he doesn’t take Henry seriously, (tennis balls anyone?). Carbone’s Dauphin accent and wild west mannerisms are right on the mark and never wavered. She was a joy to watch.

Barbara Hauck as the Welshman Fluellen is great.  Even with a constant toothpick clenched between her teeth, her accent stays strong and clear. Hauck easily conveys Fluellen’s desire to be right in everything and is willing to argue with anyone at any time, often supplying more laughs for the audience.  Hauck works particular well playing off Fluellen’s companion Gower, played by Daniel Douek.

Lance Bankerd, here as The Storyteller, plays the role of the chorus who guides the audience through the play. Bankerd is a wonderful surprise! He is eloquent, and his wild west accents sound so natural, I easily pictured myself back in time with a tumble weed blowing across the dry, caked earth.

I find that Cohesion Theatre is always ready to push the envelope and find new, different and better ways to do theatre and to celebrate the individual. Cohesion challenges the audience to look at one of the most known historical plays in a different light, and perhaps what we Americans have in our history isn’t so far from Europe’s bloody past.