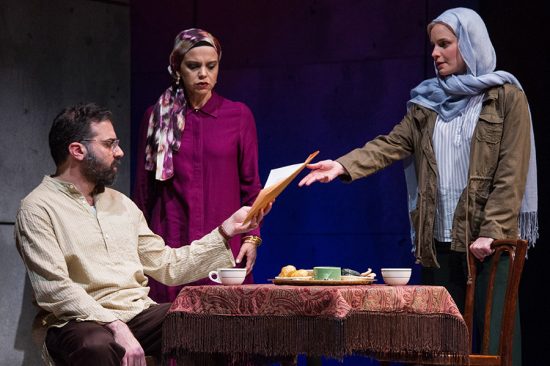 Past the point of no return, is there a way out?  This question is front and center in the Arlene and Robert Kogod Cradle in “Intelligence” at Arena Stage’s third world-premiere play as part of their Power Plays initiative.  Written by Jacqueline E. Lawton and directed by Daniella Topol, “Intelligence” attempts to hold to scrutiny the US invasion of Iraq through the perspective of those who witnessed its dubious catalyst, but the underdeveloped protagonist and over-reliance on media as a frame narrative create an ambitious, but sometimes unsatisfying recapping.

“Intelligence” centers around a covert CIA operation led by Valerie Plame (Hannah Yelland).  Shortly before the invasion of Iraq, Plame obtains information that Dr. Malik Nazari (Ethan Hova), uncle of Georgetown tailor Leyla Nazari (Nora Achrati) was involved in the development of chemical warfare agents for Saddam Hussein.  Dr. Nazari denies that the agents were weaponized and agrees to track down his colleagues in order to confirm his claim.  As war begins, Valerie finds herself questioning the validity the conflict’s pretenses and the victim of journalistic fallout from her husband, Joseph Wilson (Lawrence Redmond)’s insistence on exposing the US’s true intentions to the public.

Lawton has tapped into a fascinating premise for a political thriller, with Valerie facing a cog-in-the-machine dilemma only exasperated by an extreme political and moral division with no clear compromise in sight.  The adversity she faces is demonstrated through the set design: pillars in the background move to set boundaries for each scene, demonstrating paradigm shifts and a world contorting to propagation by having addresses by the Bush Administration projected onto them.  Coping with this while indirectly taking a side through your profession, let alone dealing with an imbued sense of “with us or against us” nationalism spurred by post-9/11 fears offers an interesting personal drama on the cognitive dissonance one would have to suppress or compromise.  Lawton, however, places a priority on the question of whether Valerie can adapt to do what she perceives to be the best thing during trying times.  The more general focus means the play never attempts to center on her character, but rather has Valerie exist to react to the turning points of the invasion, ultimately sacrificing individuality.

Valerie is supposed to be in fierce opposition to falling into blind allegiance, but the creative structure makes her entirely dependent of it.  Yelland plays her consistently inconsisently, employing a gratuitous amount of head-shaking as gesturing combined with a tendency to punctuate her syllables commandingly, even in situations where she knows she has complete control.  Valerie, therefore, appears unstable in every scene, most notably being when she meets the meek, incredibly polite Dr. Nazari, establishes a power dynamic, and then asserts herself in the tone she uses with her boss (a stern Aakhu Tuahnera Freeman).  Those scenes, speaking of, are more volleys of “as you know…” dialogue between the two on unfolding news before Valerie is ultimately dismissed.  Scenes at home fare little better, as Wilson parrots statistics and talks about journalism effecting the American people – never him.  In either setting, scenes do not so much serve to develop characters so much as act as retrospective exercises in affirmation of 2017 American understandings about the Iraq War though people whose views are their character.  Compare this with a scene transition where Dick Cheney lists what he perceives to be the invasion’s advantages.  That level of defense is never captured by anyone in this work; their job is to do a job or help a person, so one needs to justify their intuition.  The footage – the narrative – assumes a stronger character than the protagonist.

Fittingly, the best elements of the play are those elements that embrace and engage with its frame narrative.  The scene transitions, while not subtle, invite a greater discussion that comes to life in scenes featuring Leyla or Dr. Nazari.  Though Leyla lives in America and Dr. Nazzari is trying to find redemption, they are both directly impacted by the conflict as it tears their past and present apart with them helpless to stop it (the confession scene addressing this features Hova stealing the show).  Like Valerie, Leyla’s portrayal is unusual; Achrati’s pauses and elongated syllables occasionally make it seem like she’s not certain of the emotions her sentences convey, but her character is far more interesting.  Her more personal stake in the events makes her easy to invest in, and she takes initiative in every step of her journey, from her employment to her choice to bring Valerie to her uncle to later venturing to find him during the invasion.  When she is detained during her rescue effort, the heated scene that follows between her and Valerie provides both the closest opportunity the latter has to consider her actions’ consequences and the one time Yelland’s performance finds a perfect fit.

“Intelligence” wants to be a commentary on individual choice to do good in times of unstoppable crisis, but when we compare its individuals and witness its strengths, that’s when the cracks appear and Lawton’s writing appears at polar opposites. Like many new plays, with some refinements “Intelligence” might be able to find a good home on stage.

Artistic Director Molly Smith of Arena Stage and their Power Plays initiative is an important program that provides opportunities for 25 new plays and musicals focused on stories of politics and power to be produced over the next 10 years.

“Intelligence” runs through April 9th in the Arlene and Robert Kogod Cradle at Arena Stage.  For more information, click here.