Theatre Review: ‘Let’s Not Talk About Love’ by Bethesda Little Theatre at The Writer’s Center 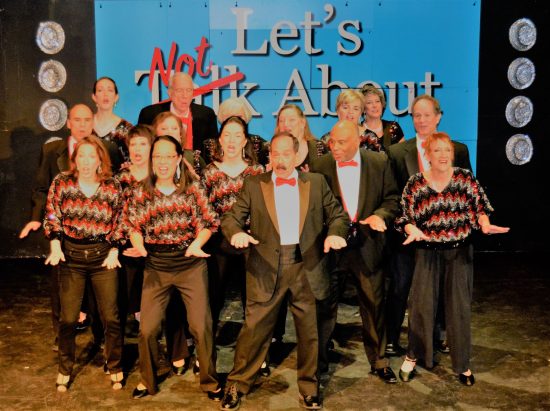 The company of “Let’s Not Talk About Love.”

“Birds do it, bees do it…” and the Bethesda Little Theatre is doing it! Falling in love – all kinds of love. Songs from a wide variety of genres make up the original musical revue “Let’s Not Talk About Love.”

…a fun and joyful romp…

At the beginning of the show, there is a large poster on the back of the stage that lists the different kinds of love that will be represented in the revue – things like surprising love, brotherly love, friendly love and everlasting love, just to name a few. As the show progresses, the signs are turned around, revealing the title of the show.

The cast is comprised of 17 talented individuals. Most of the numbers are sung by one or two cast members, sometimes with a bit of soft shoe thrown in. There are a few numbers that are trios, including two versions of the song from which the show gets its name, which opens the show and then welcomes the audience back from intermission. There are also songs that encompass the entire ensemble- providing a dynamic pop to the selected numbers. Everyone gets their moment in the spotlight, and the cabaret format allows each of the cast’s talents to shine in turn. While there isn’t a ton of choreographed dance, there is a bit; it adds some flair to the numbers where it’s included.

There are songs from sources as varied as a pop song from the 1960’s (“Breaking Up is Hard to Do”) to the Audition sequence from the recent film “La La Land.” Other songs included are Broadway favorites such as “Till Him,” from the musical “The Producers, “Company” and “Side by Side” from the musical “Company” and the “Cell Block Tango” from the iconic musical “Chicago.” There is also a medley of Beatles tunes. The highlights for me were a combination medley of “My Girl” and “My Guy,” director Martin Bestimt’s powerful version of “Fifty Percent,” and both songs performed by Michelle Hakes, whose powerful voice greatly impressed this reviewer.

The band, (Stew Williams and Jeffrey Hayes) is small but mighty and the simple stage design allows the songs to stand front and center. Providing so many costumes must have been a challenge, but costume coordinator Alice Page Smyth was up to it. I do feel that the audience’s experience might have been improved by using microphones for the performers; some singers had quieter voices and it was a bit difficult to hear them over the amplified piano and percussion at some points. Overall, this revue is a fun and joyful romp through the complicated topic of love presented in an enjoyable package.