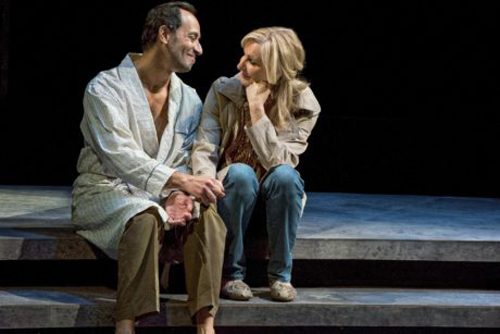 Literally translated, “Los Otros” means “the others.” With immigration a huge part of the current political maelstrom, Everyman could not be debuting a more relevant new piece of theatre. Continuing with a season supporting thoughtful, new works, Everyman went all in commissioning its first musical. “Los Otros” is a reimagining of the 2012 production, originally performed at the Mark Taper Forum in Los Angeles. The musical boasts a top-notch creative team with music by Tony Award nominees, Michael John LaChiusa (“The Wild Party”/”Giant”) and Ellen Fitzhugh (“Grind”/”Paradise Found”) who wrote the book and lyrics. The new Associate Artistic Director at Everyman, Noah Himmelstein (“An Inspector Calls”/”I Am Harvey Milk”) directs with a dedicated and sensitive touch.

Bravo to Everyman for its brave leaps this season. ‘Los Otros’ makes one yearn for more.

Broadway veterans Judy McLane (“Mamma Mia!”/”Kiss of the Spiderwoman”) as Lillian and Philip Hernández (“Kiss of the Spiderwoman”/”Les Miserables”) as Carlos, captivate and mesmerize in a story of two ordinary people from very different backgrounds. Their lives eventually intersect and embrace in a surprising way as they each relate to us – and to each other – seminal moments throughout their lives.

Most of the musical is sung and these seasoned professionals could not be more suited for the task. They beautifully embody their characters at each stage in their lives. The score echoes of the work of Sondheim with its smart lyrics and storytelling technique and has a wonderful blend of the sound of the eras in which the characters recount their stories – from the 30s through the 90s – combined with Latin influences. With its reoccurring themes, the music is a blend of colorful threads that construct a lovely fabric but with no big, standout number.

We begin in the present (here it is 1995) with Lillian sitting in a hospital waiting room, anticipating the status of a friend she brought in for an emergency. Transported back to 1952, we meet the young Lillian, a white girl living public housing south of San Diego. Poor but happy and looking for something to do, she witnesses to a young Mexican couple jumping off a train with a baby who then seek temporary refuge in a cave. Her compassion and what she then does has a lasting impact on her life.

We are then introduced to Carlos who is taking a late-night shower. It becomes apparent that he is in the beginning stages of a medical emergency. This evokes memories from his past as a little boy in the late 1930s. He comes from a place in Mexico that is plagued by frequent hurricanes and he is fighting his mother from tying him to tree that will  ultimately save his life. In the aftermath, his mother decides that the family must go to the America for a better life.

The stories of these two people weave back and forth as Carlos, with great wit, recounts the indignities and joys of an immigrant boy growing up in Southern California in the mid 40s with his job a young janitor in a store during the school year and picking plums with his and several other families in the summers during World War II. The innocent discovery of his true sexuality with his best friend Paco is handled very delicately and with humor. Later in the 90s, he has become very successful and is living with his Anglo partner of 15 years. His love is tested by his partner’s passion for collecting that borders on hoarding. Carlos has become so completely assimilated that he comments on “all these Mexican immigrants.”

Lillian seems to have no big life plan and finds herself an overwhelmed divorced mother of two girls, living in Burbank in 1967. With the help of her ex-husband, she crosses the border to smuggle in a housekeeper to help raise her children. Again her preconceived ideas and prejudices are shattered. In the 80s, she makes a questionable choice about seducing an 18- year-old Mexican boy she meets at a late-night taco stand while drunk. Immediately you imagine all the bad things that could happen with this ill-advised decision. These encounters are designed to make the point that she is in a battle between her own preconceived prejudices and her basic goodness. Ultimately these interactions have surprising resolutions but sometimes feel too Disney-like.

It is frustrating that the two actors only come together and interact at the very end. It left one yearning for more exploration of their relationship. The connection between Carlos and Lillian may have come slower to me than others in the audience but there was no denying it was a touching and sweet moment.

The orchestrations by Bruce Coughlin are performed by an accomplished group of six musicians led by conductor/keyboardist Jon Kalbfleisch. They are partially hidden behind one of the intricate, Spanish-inspired panels designed by Daniel Ettinger. The other two panels slide back and forth behind the actors and with expert lighting by Nancy Schertler, create the moods and beautiful patterns for a story that moves back and forth between time and the two actors. It a very simple set with the floor reminiscent of multicolored Mexican tile. Lillian’s only furniture is two waiting room chairs, while, Carlos, has a modern shower consisting of a multi-layered stone wall and a hint of a study with books and art pieces to the side – an indication of his success.

Unless one is a Native American Indian, we are all immigrants and “others.” To scapegoat any one group has historically resulted in dire consequences. “Los Otros” maybe cliché and wrapped up too neatly in some ways but at its core it is a story of love, hope and our “sameness” that surpass politics. Bravo to Everyman for its brave leaps this season. “Los Otros” makes one yearn for more.