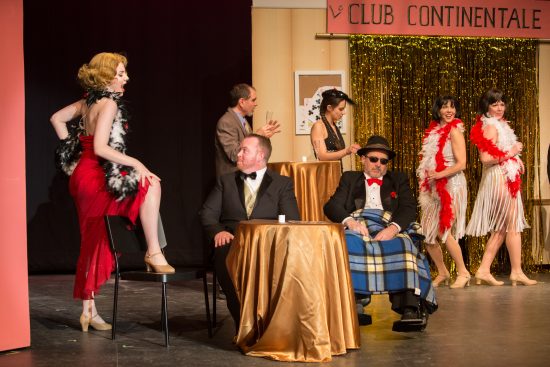 The play is called “Lucky Stiff” and I felt like a lucky woman to be able to attend this excellent production of the very funny and tuneful Lynn Ahrens/Stephen Flaherty musical put on by Silhouette Stages in Howard County, MD on Friday, March 10, 2017.

… a wonderfully amusing and heart-warming musical with both phenomenal acting and singing.

The premise brought to mind the 1980s film “Weekend at Bernie’s” but “Lucky Stiff” had its own sweet twist that truly put a smile on my face. Harry Witherspoon (Rob Wall) is a struggling British shoe salesman with a bland life until he is suddenly named as his deceased American uncle Tony Hendon’s heir with a six million dollar inheritance. There’s a catch, of course – Uncle Tony wanted to see Monte Carlo before he died, and he doesn’t intend to let death stop him. Harry must follow his uncle’s tape-recorded instructions and take his taxidermied uncle on the trip of a lifetime or else the money will go to Tony’s favorite charity, the Universal Dog Home.

Rob Wall as Harry had an amazing voice. It was a strong tenor with just the right amount of vibrato and plenty of support and projection. The high notes scattered throughout his many songs were no problem for Wall and his acting was equally as good as his voice. He also maintained a cultured and flawless British accent throughout the show that was completely convincing.

Another stand-out vocal performance was Kristen Zwobot as Tony’s very New-Joisey lover Rita La Porta. Zwobot had the voice of a true Broadway belter and her performance as the unethical and madcap Rita was the comedy highlight of the show. Don Patterson as Rita’s brother Vinnie Diruzzio was also a comedic delight. His utter nervousness throughout the problematic situations that Rita continuously threw him into was hilarious.

Maddie Bohrer was very enjoyable as Annabel Glick, the serious note-taking employee of the Universal Dog Home who was determined to catch Harry missing the mark of his uncle’s assignments and thereby earn the six million dollars for her charity. Bohrer’s deep devotion to dogs was not only funny but relatable, especially in the song “Times Like This” when she extols the virtues of dogs as sometimes superior companions to romantic partners. I think everyone in the audience, myself included, was laughing and nodding our heads in sympathy!

The cast was rounded out by enthusiastic and admirable performances from Alyssa Bell as the flamboyant French lounge singer Dominique Du Monaco, Bill Pond in a dazzling solo as the lounge Emcee, Todd Hochkeppel as the eager to schmooze tourist Luigi Gaudi, and Michael Cornell as the Lucky Stiff himself, Tony Hendon. Much of Cornell’s performance consisted of being on-stage playing dead in a wheelchair, an act he kept up through the curtain call, much to my amusement!

The bit parts played by the nine-member ensemble were also quite well done, with each minor character feeling fully realized and adding a lot of flavor to the story. From live casino games to a British punk to a drunken hotel maid and many more, I enjoyed every one of the smaller parts and they were all well-acted and meaningful pieces of the overall story.

The Costume Design by Linda Swann was right on the money. From New Jersey mobsters and mob wives to proper British folk to vacationing tourists and sexy lounge singers, the costumes added flair and authenticity to the play. I also enjoyed the Set Design by Douglas Thomas which had to portray sets from New Jersey to England to Monte Carlo. My especial favorites were the cluttered shoe store, the optometrist’s office, and the airplane set. Ethan Hogarty as Sound Operator deserves applause for deftly operating the soundtrack CD so that every scene change had ongoing music with no lulls, the sound effects happened at exactly the right moments, and every song intro flowed seamlessly with the dialogue. Sometimes using a CD can be more difficult than a live orchestra but in this case it was flawlessly executed.

I also applaud director Conni Trump Ross for choosing to mount a silent auction in the lobby to benefit the Canine Humane Network, a local no-kill dog rescue. Ross shared before the play began that because the plot of “Lucky Stiff” deals so much with dogs, she wanted to use the play as a means to assist a local rescue, which I find commendable.

I highly recommend “Lucky Stiff,” directed by Conni Trump Ross for Silhouette Stages, as a wonderfully amusing and heart-warming musical with both phenomenal acting and singing. Seeing such a high-quality production was a true delight!

Running Time: 2 hours and 10 minutes, with one intermission.