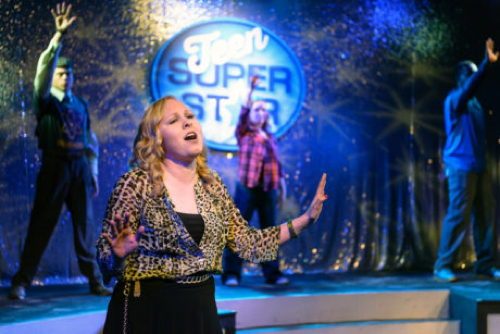 “Mad Libs Live!” lets the audience fill in the blank. The musical, featuring four high school kids competing for the title of Teen Superstar, uses adjectives, adverbs, nouns and verbs selected randomly to complete its pop songs. Depending on the day, this could be kind of amusing or seriously funny.

The feel-good musical starts off by introducing the four singers in the competition group. There’s Merrily (Meghan Anderson) who joins the group to build her confidence writing songs. There’s Virtuosa (Kara Leonard) who just wants to be the star and make her nana proud. Then there’s Virtuosa’s older brother, Gogo (Dumar Valencia), who repeatedly lets us know that the only reason he joins the group is to win back his ex, Linsey. Finally, there’s Geyser (Brady Stevens), a science geek who just wants to make friends.

The convoluted plot involves each member of the group receiving a score for the song they choose to sing for the competition. And of course, each song has a number of fill-in the blanks, supplied via four different colored pails for the different parts of speech.  This is Merrily’s fault – she didn’t have time to finish any of the songs.

The show alternates between the competition and flashbacks of how each singer joined the group. Virtuosa is obvious; she has diva written all over her. She talks her brother into joining the group by pointing out he can only win back his ex by being a rock star (although I don’t think a Teen Superstar competition necessarily will earn him rock star status). Gogo and Virtuosa spot Geyser and know he’s an easy target. After all, there’s more to life than playing Star Trek games. And Merrily joins due to her writing ability – oh, and her secret crush on Geyser. Why else would she talk to him in Yoda speak?

In between songs, there’s also some drama offstage, as the contestants discuss their scores. In the end, it all comes down to Merrily getting a ‘10’ to win it all. Can she bring home the Teen Superstar prize?

Anderson is ‘totally, absolutely, completely’ sweet in her role as Merrily. As Virtuosa, Leonard belts out her songs with attitude (as she would say, ‘OMG!’). Valencia seems like a natural-born athlete as energetic Gogo. And Stevens is the epitome of geekiness with his large vocabulary and love for Star Trek and Star Wars (yes… that’s affirmative).

The Mad Libs part of the show seems kind of like a gimmick. Sometimes it works (the day I went, the record company was called ‘Smelly Chocolate Sauce’); sometimes it’s just distracting, especially when the show is stopped so that the actors can call out which member of the audience put that adjective/noun/verb/adverb into the bucket and ask why they did that.   Since the show is all about the Mad Libs aspect, the plot is simple and relies on the interaction between the four (stereotyped) contestants.