Theatre Review: ‘Mrs. Miller Does Her Thing’ at Signature Theatre 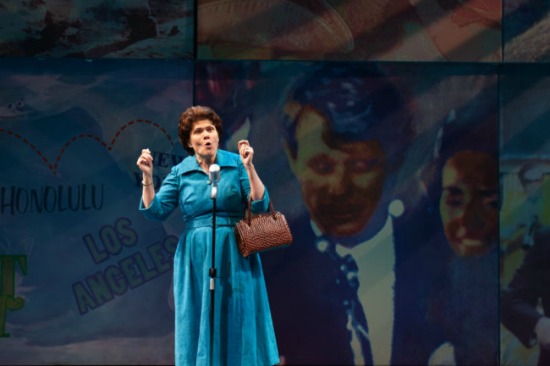 I hope that – from time to time – everyone else has the nagging concern that they might secretly be ‘a Mrs. Miller’, because I certainly do. A housewife from Claremont, California, Mrs. Miller took America by storm in the late 1960s, sold hundreds of thousands of records, performed on the Ed Sullivan Show, and even did a tour to Vietnam with Bob Hope, but that’s not the part of her story that I mean. It was not that Mrs. Miller was an extraordinary talent, instead, it was her comical lack of musical talent that made her a sensation, a ‘novelty act’, which left in its wake a powerful question of whether she was a part of the joke, or just the butt of it, “the laughing stock of the nation.” This is the secret fear, the gap between one’s self-perception and the reality of others’ views, which is both compelling and confronting in “Mrs. Miller Does Her Thing,” the latest work by Pulitzer Prize winning playwright James Lapine, who also directs this world premiere production at Signature Theatre. Billed as a “play with music,” “Mrs. Miller Does Her Thing” was co-conceived by Lapine and Mark Oliver Everett, lead singer of indie band “Eels,” themselves known for the occasional light-hearted eccentricity.

This “play with music,” however, is about much more than telling a story inspired by the “very limited accounts” of Mrs. Miller’s meteoric rise and predictable fall. Mrs. Miller becomes a sort of surreal symbol at a time of national upheaval and doubt, a foil against which the societal and musical changes of the late 60s grind. In fact, historical events loom large above the whole play, literally and figuratively. As Vietnam intervenes in the action, Heidi Ettinger’s stylish set weaves a patchwork of iconic images from the era, making this history – literally – a part of the furniture. As scrims, these images appear, disappear and also slide to open new spaces in the set, making a versatile and captivating performance space.

Monk and Brockman carve out the entertaining and deeply moving core of the play.

Lapine’s vision of Mrs. Miller is – almost – completely uncomplicated, an innocent in the world, which makes for a surprisingly demanding role. Tony Award winner Debra Monk rises to the intricacies exceptionally. Throughout the play, we largely see Mrs. Miller as others do, but in a few brief moments, including the very opening, we are gifted a glimpse inside her head. Monk must move instantly from this internal world back to external reality without a moment’s hesitation. She manages this deftly. Jeff Croiter’s lighting design also guides us through with clarity and confidence.

These internal moments also reveal Monk’s exceptional musicality, though the precision required to sing consistently out of time and tune – necessary to capture Mrs. Miller’s particular musical proclivities – is trickier than it might seem at first. The stellar work of Jacob ben Widmar, Kaitlyn Davidson, and Kimberly Marable, Mrs. Miller’s back-ups, must also be mentioned as they fearless hold pitch against Mrs. Miller’s characteristic warble.

If Mrs. Miller is in some senses the ‘old guard’ of American values, then her niece Joelle is the changing times, transformed through the show from a vision of conservative ‘respectability’, via the sexual revolution, into a rose-coloured-glasses-wearing hippy, eventually devastated by Vietnam. Rebekah Brockman’s performance as Joelle is another outstanding one. From her initially blunt assessment of her Aunt – “she’s a terrible singer” – to the moral compromise of her financial gain from her Aunt’s success, Brockman is a delight to watch on stage as moving as she is amusing. Jennifer Caprio’s costumes very clear track Joelle’s change, and are bold and unequivocal throughout. Monk and Brockman carve out the entertaining and deeply moving core of the play.

I said Mrs. Miller is ‘almost’ uncomplicated, because, at a crucial moment Lapine subtly shows his hand and in so doing creates quite a startling disconnect from the rest of the show. Asked if she was “in on the joke,” Mrs. Miller clearly feigns innocence in putting down the journalist who asks. She is capable of self-reflection and in the end,  Mrs. Miller is smarter than anyone gives her credit for.

It should be shocking to acknowledge the extent to which we simply construct our own realities. What the show makes clear, however, is that whether or not we are aware – whether or not we attend to it – we are also complicit in the realities of those around us. Everyone knows Mrs. Miller has a terrible voice, but no one is prepared to confront her with this reality. This is, of course, the heart of what it means to be aspirational, but the clear moral ambiguities of this, confronted throughout the play, make for intriguingly entertaining theatre.

Advisory: Some adult language and themes.