Theatre Review: ‘Peter and the Starcatcher’ at Constellation Theatre Company 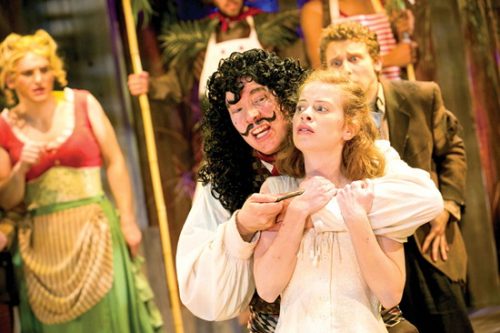 How did Neverland come to be and why can Peter Pan fly? This backstory is explored in “Peter and the Starcatcher” based on the novel by Dave Barry and Ridley Pearson. The play is written by Rick Elice with music by Wayne Barker. This story is more than a prequel is Peter Pan. It is the journey of a child who has had the face the horrors of life at far too young an age and how he finds home.

The play follows Molly Aster as she journeys to meet her father who is on a secret mission for the Queen (God save her!) to destroy Starstuff, which if fallen into the wrong hands could be quite dangerous. Molly meets three orphan boys, one of whom does not even know his name. Meanwhile, her father’s ship gets taken over my pirates led by the fearsome Black Stache who leads his crew with flourishing malapropisms. What ensues is a lot of charming silliness and delightful heart.

This production is a fantastic example of the beauty of theatre. It is truly a show for all ages.

The beauty of this type of storytelling is the transformative nature. It is reflective of the way one would tell the story to a child. One moment you are a character, the next a narrator explaining why a thing happened and giving your aside comments, the next acting out a ship or a bird or a mermaid.

The precocious Molly Aster was played by the delightful Megan Graves. She was quick and no-nonsense. Graves is a clever actor that is able to perform the role so adorably. She shows great strength and versatility.

Boy was played by Dallas Tolentino. Tolentino is a physical actor who played the role with such a great heart. He truly captured the essence of an angry boy who life has treated terribly. He is a smart actor who works well in the ensemble.

Michael John Casey is Black Stache, the fearsome pirate captain. He is just flourishy and corny enough to be absolutely endearing.  He gives us a fabulous glimpse of the origin of Captain Hook. We also get to meet Smee, played by Matt Dewberry who played Officer Lockstock in Constellation’s recent production of “Urinetown.” Dewberry’s Smee is just the way lovers of Peter Pan remember him: adorably bumbling and unsure of his rather good ideas.

There were so many wonderful performances. With an ensemble this strong, everybody stood out. Jordan Campbell played a hilarious Mrs. Bumbrake, nanny to Molly. Campbell partners well with Keith Richards as Alf, the gassy crewman who has a thing for Mrs. Bumbrake. Ian Anthony Coleman is a great angry Captain Slank who is actually far scarier than Black Stache. One of the funniest performances was by Matthew Schleigh as Fighting Prawn, the chief of the Mollusks, the people already living on the island. The two orphans that accompany Boy were the food obsessed Ted, played by Christopher Michael Richardson, and Prentiss, played by John Sygar, who is always insisting that he is the leader.

Kathryn Chase Bryer directed to piece in such a way that it flows fast. It doesn’t slow down for the audience to catch up so you have got to focus. That is part of the wit. Kelly Maxner and Mollye Maxner choreographed the piece which was great. It is a movement heavy show and the choreography fit the style and the intentions of the characters well. Deborah Jacobson music directed and the music sounded wonderful. Jacobson was always half of the band. The percussionist was Manny Arciniega. They made a great pair.

A.J. Guban was the scenic/lighting designer. Guban’s design was multi-layered and complex. Although the set never truly changed, it appeared it at times. It made sense for multiple ships and an island. There was a marvelous world created for the ensemble to physically explore.

Kendra Rai did the costume design, the greatest feat being the mermaids. They were beautiful and yet hilarious at the same time. The other costumes were wonderful in that they could easily be used for the multiple characters that the actors played.

Matthew Aldwin McGee was the puppet and prop designer. His work was magnificent and creative. The usage of mirror shards to create birds and barrels to create a crocodile was wonderful. The ensemble handles a lot of props and all of them were lovely.

This production is a fantastic example of the beauty of theatre. It is truly a show for all ages. Make sure that you see “Peter and the Starcatcher.”

Running Time: about 2 hours with one intermission.

Constellation Theatre Company’s production of “Peter and the Starcatcher” runs at the Source Theatre until March 12, 2017. For tickets and more information click here.