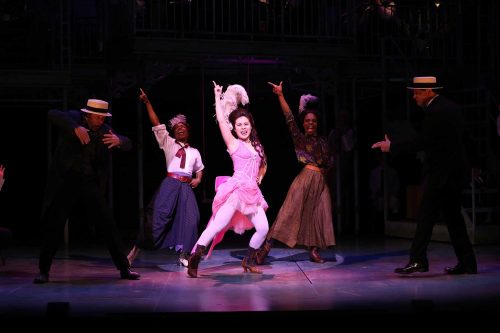 Phenomenal music, singing, and acting make up the top-notch production of “Ragtime” now playing at Ford’s Theatre in Washington, D.C., which I attended on March 15, 2017.

The powerful vocal performances and acting will stay in your soul long after you leave the theatre.

The play tells the story of three families in 1920’s America: one family African-American, one family Jewish immigrants from Europe, and one family wealthy and white. Their stories slowly intertwine throughout the course of the play although they appear unrelated at first.

Mother bids Father farewell as he leaves on another trip around the world, this time to the North Pole, but he’s barely gone before she discovers a baby buried in her garden.

I was truly impressed with the production quality and the acting and vocal talents of the entire cast. Kevin McAllister, who played Coalhouse, drew me in with his voice from the very beginning of the play. He could sing with a silky smooth tenor and then in later scenes plunge into a strong lower range in songs like “The Wheels of A Dream.” Coalhouse is a ragtime pianist and McAllister perfectly mimicked the piano parts of the score on the upright piano that was often in center stage to the point where I sometimes questioned if he was actually playing!

Coalhouse’s wife Sarah was played with distinction by Nova Y. Payton who had a hauntingly beautiful singing voice. Her solo in “Your Daddy’s Son” had shimmering soprano notes and gave me chills, especially when she contrasted her high range with the raw pain she put into her delivery of the lower notes in this mournful song. Sarah is featured as a singing angelic vision later in the play and how completely appropriate for such an amazing vocal talent!

The role of Mother featured another stunning vocalist in Tracy Lynn Olivera. She had a deep and rich contralto voice and her solo “Back to Before” was another highlight of the show. I enjoyed seeing Olivera portray dithery desperation at the beginning of the play without her husband’s advice and then transform into an assertive force by the final scenes.

Jonathan Atkinson played the fourth lead of Tateh and I enjoyed his exquisite vocals from his first song “Journey On” to his transformation into Baron Ashkenazy, singing with Mother in Atlantic City. Atkinson displayed a wide range of emotion throughout the show, from fiery fierce anger at injustices to tender devotion to his daughter.

I also enjoyed Justine “Icy” Moral’s performance as the flirty vaudevillian Evelyn Nesbit and Felicia Curry as Sarah’s Friend singing “Till We Reach That Day.” Christopher Mueller as Harry Houdini, James Konicek as Father, and Gregory Maheu as Younger Brother were also notable performances, but truly every actor delivered an outstanding performance.

Based on the 1975 novel by E. L. Doctorow, the music by Stephen Flaherty and lyrics by Lynn Ahrens were quite engaging; in fact, I am still humming many of the tunes!  I did find many of the lyrics compelling, especially in light of today’s political climate. Lines like “every road a new dead-end” felt impactful in a sharply relevant way.

The orchestra led by Christopher Youstra, which was really a small jazz ensemble rather than a classical pit orchestra, did a fantastic job swingin’ away on the deliciously jazzy score and it was fun to see them elevated on the metal framework above the stage so that they were a focus of the performance.

Overall, I highly recommend “Ragtime” at Ford’s Theatre. The powerful vocal performances and acting will stay in your soul long after you leave the theatre.

Running Time: 2 hours and 45 minutes, with one intermission.

“Ragtime,” directed by Peter Flynn, plays through May 20, 2017 at Ford’s Theatre in Washington, D.C. Many performances sold out; limited tickets remain. For more information, click here.