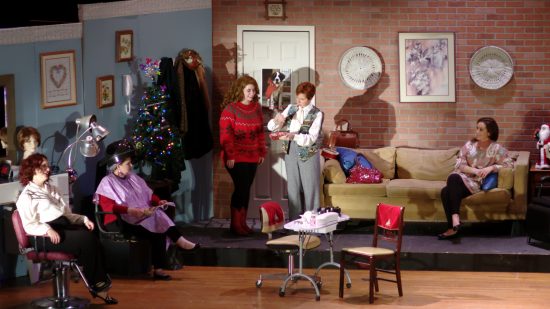 Every so often, we of my ilk – reviewers – go to a theatre on a Friday night, the opening of yet another production.  It’s what we do and, for me at least, all too often, it’s just my job to report to the readers what I thought about what I saw.   Luckily, I usually enjoy it.  Occasionally, I don’t like it.  But every now and again, I love every minute of it.  And that’s the case with Heritage Players and their offering of “Steel Magnolias” Robert Harling’s heart-tugging story centered on the lives of six women and their friendship over the span of three years in 1980’s Louisiana.  Despite a few technical missteps, this is a wonderful evening of theatre.

Directors Kevin James Logan and Katie Sheldon have done a fantastic job of crafting this well-cast and smartly paced production.  Opening night audiences were let in on the fact that, just two days prior, a faulty overhead light arrangement had come crashing down on the set, requiring them to rebuild half of it in less than 48 hours. Having a crew in place that could accomplish this as well as a cast that was able to give up the final two days before opening so the work could be done in time to meet that deadline is remarkable of itself.  If the production suffered for the delays, I certainly didn’t notice.

…this is a wonderful evening of theatre.

Elizabeth Kanner’s set is so well done that I felt like I was actually spending time in a beauty parlor.  Subtle touches like the wig stands and the kitschy tchotchkes sprinkled liberally around add just the right touch of atmosphere.  Brad Ranno’s lighting and sound design could use a little more luck on the technical side, particularly with the flickering lights and uneven sound from the body mics, but when it worked, it was swell.  Emily Luking’s costumes were well executed and fit the period nicely.  I’m not sure who was responsible for the musical selections (directors?) but it always complimented the scenes and never detracted or overpowered as incidental music can do in less skillful hands.

And those actresses!  I swanee (that’s how they say ‘I swear’ in Chinquapin Parish, Louisiana) each was as good as and better than the last.  Amy Heller as Truvy is as warm and comforting in her role as a big ol’ slice of corn bread and hot bowl of gumbo.  Rebecca Clendaniel’s Annelle takes her character from a ‘doe in the headlights’ scared and confused newcomer, through a couple of changes until she arrives as a ‘true smartass.’  It’s so nice to see a character actually grow over the course of a performance and Ms. Clendaniel does that exceptionally well.

Rachel Francis Kelly picks up the mantle of Julia Robert’s performance in the movie and gives it just the right amount of spin on the beloved character of Shelby.  She’s beautiful, which never hurts in that kind of part, and a perfect blend of Southern debutant and a woman determined to carve her own destiny, despite medical advice to the contrary.  Maribeth Vogel is all Lousiana charm and grace as Clairee, former first lady of the parish.  No surprise there – Ms. Vogel is a consummate actor and always chooses roles that fit her like a custom-made glove.  This one is particularly well suited, especially in scenes when she is asserting herself as more or less everybody’s Mom.  Perfection.

In a group of talented women who all are terrific in their roles, two are particularly noteworthy. First, Anne Hull as Ouiser, whose crusty and sharp-tongued take on the character is funny and wonderful in her sarcastic but totally endearing compassion for her friends.  Ms. Hull is so well suited to the role that I stopped comparing her to the movie version (Shirley MacLaine) about five minutes in.  No mean feat, by the way.  I’m a big fan of MacLaine’s.  Now I’m a big fan of Anne Hull’s, as well.

And Katherine Wenerick-Bell as M’Lynn Eatenton is an absolute star.  She is the epitome of Southern gentility and breeding without ever seeming stuffy or snobbish. She is so believable that it is heart breaking to watch her in the scene where her grief over the shocking loss of one of her children renders her almost – but not quite – hysterical.  She wisely knows just how far to go without crossing the line between incredible acting and over-the-top scene chewing.  A true pro.

“Steel Magnolias” is a wonderful play with some of the most quotable lines in the history of American theatre.  I especially like “laughter through tears is one of my favorite emotions.”  Which rather nicely sums up this whole production.