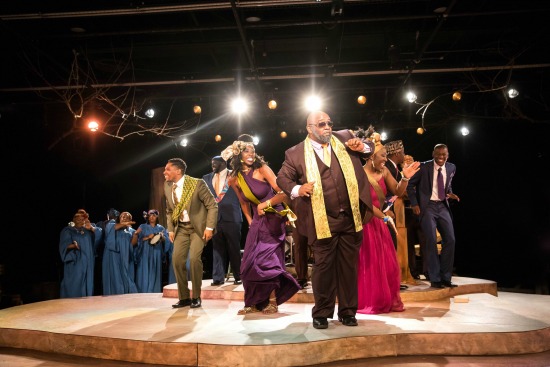 The time is the present, the place a ‘sacred site’. Part religious rite, part parable, part Gospel musical and part Greek tragedy, “The Gospel at Colonus” is a rich tapestry, and yet, its most remarkable feat is its seamlessness, how natural this unique combination of elements is. The ritual aspects of religious service, the choric odes of ancient Greek, the didactic drama of The Gospels might be more obvious here, but they are all, already, crucial to each. The emotional power of these elements collide and reinforce one another in a startling and revealing work conceived and adapted by Lee Breuer with music by Bob Telson. WSC Avant Bard is aware of each of these elements and true to them all in creating a compelling and deeply moving production. It is exultant, uplifting, heartbreaking, demanding, accessible, esoteric, poetic and profound.

As the choir enters, we are welcomed to ‘the service’ and reminded we are on sacred ground:
“think no longer that you are in command here”.  In the form of a parable, with gospel and gospel-inflected music, we are told the story of “Oedipus at Colonus”, the second of Sophocles’ “Theban plays” dealing with the Oedipus myth. The story concerns Oedipus’ death and was actually the last of the three to be written, though it is the second in the chronology of the stories. It was written not long before Sophocles’ own death and it seems no coincidence that Oedipus seeks sanctuary and to end his life in Sophocles’ own birthplace, Colonus. There is little action in the play, but much reflection on life, living well and the nature of death. We are asked profound questions and questions with metaphysical resonance, too, like “where shall I go?” and “how shall I live?”

…a compelling and deeply moving production.

Rafealito Ross (chorus) delivers a stirring performance very early in this production, with the stunning, haunting and thrilling a capalla “Fair Colonus,” a demanding song vocally, while the ‘driving’ of “Never Drive You Away” reveals the true energy of the full cast, in glorious full voice. The musical direction, by e’Marcus Harper-Short, is superb, with Harper-Short even leaving the keys for one scene to deliver a tense and gripping dramatic performance in the role of Creon. There are powerful individual performances, DeMone and William T.Newman Jr. in the split roles of Oedipus, and Tiffany Byrd as the ‘dutiful daughter’ Antigone, but director Jennifer L.Nelson has also created a work in which the ensemble is the true star.

Tim Jones’ set is immersive and intimate, the sacred grove a tiered hill up to the pulpit. Big, beautiful branches hang from the four corners – simultaneously evoking the natural surrounds, and something more formal, more temple-like. Danielle Preston’s costumes are rich and offset the set beautifully, while John D Alexander’s lighting seems to gild the stage.

Oedipus becomes a christ-like figure in “The Gospel at Colonus.” Told by the gods he will suffer for his sins and die, his death a blessing on the earth, he is finally resurrected in the catchy “Lift him up”, a song that made me utter a phrase I never thought I’d say: “that Oedipus sure can dance.” The final message is summed up simply, though. “There is no end.”

Oedipus is also anyone who has wandered, who has searched, anyone who has suffered. Theseus (A.J.Calbert), in offering Oedipus absolution says “I too was an exile,” recognising himself in Oedipus as any of us might. There are too many reasons to go and see “The Gospel at Colonus,” so I won’t try to sum them up with just one. It is remarkable to think how the story of Oedipus is told and retold, but what is more remarkable is finding a fresh way to offer this story, thousands of years down the line. In the words of the show, quoting Sophocles: “numberless are the world’s wonders but none more wonderful than man.”

Advisory: Recommended for ages 14 and up.