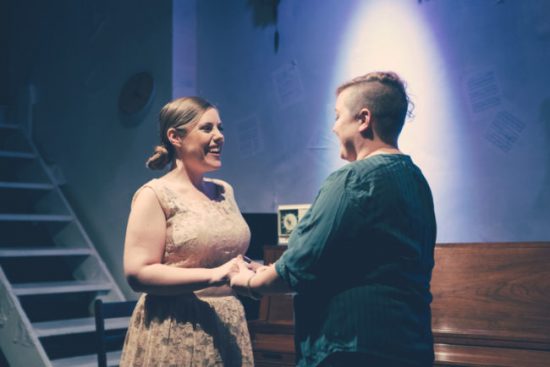 Amber Wood as Kathey and Amanda J. Rife as Jamie in ‘The Last Five Years.’ Photo by Rob Clatterbuck.

Most people who have been in a couple of relationships have had, by definition, at least one which didn’t work out. While distance might allow you to look back on even the failed relationships with a certain amount of fondness or humor through a rose-tinted rear-view mirror, in the moment there is often nothing else that feels as important or painful. The deeper the emotions that ran through the relationship, the harder the break-up. With “The Last 5 Years,” Stillpointe Theatre and director Darius K. McKeiver takes the audience on the rollercoaster of the five-year-long relationship between Jamie and Cathy, from initial infatuation and lust to frustration, anger and regret.

“The Last 5 Years” was written and composed by Jason Robert Brown in the early 2000s and while it never became a giant Broadway smash, it is something of a cult success. The musical chronicles the five-year relationship between a successful writer, Jamie, and a struggling actress, Cathy. While that description may not sound all that special, the way the story is told and the quality of the music elevates it. There are only two actors and the band. The first song is sung by Cathy as the relationship ends, and the second song is Jamie as the relationship begins. They keep alternating songs, Cathy moving chronologically back to the beginning and Jamie moving chronologically forward until at the end you have the whole story, both why they loved each other and why they think the relationship failed. It’s a clever conceit that is handled deftly in both the writing and the production.

It seems fitting for such an intimate story that Stillpointe Theatre is such an intimate space. The house fits around 30 audience members, seated in two rows. From the wall behind the audience to the back wall of the performance space was probably fifteen to eighteen feet. This means that the actors are regularly close enough that the front (and occasionally the back) row could easily reach out and touch them. The set, designed by Ryan Haase, makes a good use of the space, especially considering that most of the central playing area is taken up by the five-piece band. The back wall is plastered with pieces of sheet music with the occasional clock, and stairways up either side lead to loft areas which are used as entrances and changing areas. Along with a few chairs which are moved around, a central piano and a small Christmas tree, there is just enough room for the actors to move and not feel cluttered or constrained. There were a few limitations with the smaller space. The lighting specifically seemed affected, as there were times when the actors ended up slightly in shadow for moments where they could have been in a spotlight if the space had allowed it.

… it is rare to find a piece which feels as intimate as this.

This production is done with two casts, one with Danny Bertaux playing Jamie and Jessica Bennett playing Cathy, the other with Jamie portrayed by Amanda J. Rife and Cathy portrayed by Amber Wood. I saw the latter cast and was thoroughly impressed. Both actors have wonderful voices; Amanda J. Rife should be especially commended as she sings a part originally written for a man, adjusting from melody to harmony as needed to best utilize her voice for the songs. Amber Wood opens the show strongly as Cathy, emotion and tears occasionally choking her voice. From such a raw opening, it is almost jarring as the song transitions to Jamie’s first number, which Amanda J. Rife launches into with an energy and humor that results in a bit of emotional whiplash. Her voice has an almost blues-y quality when she lets loose that makes you sit up and take notice. While Wood conveys a depth and subtlety of emotion in soft moments, Rife is a blast of exuberance which makes you smile. It’s to the extreme credit of the cast that this is not an unchanging dynamic, either. As the show goes on, the template switches as Cathy shows the joy of a new relationship and Jamie begins to feel jaded.

Throughout the entire show, the actors are accompanied by a live band on stage, led by pianist and musical director for the show Ben Shaver. With him is Trevor Shipley on guitar, Cody Raum on bass, Livy Amouruso on violin and Steven Bainbridge on cello. They play expertly, on rare occasion interacting with the scenes that play out around them, but regularly watching and seeming genuinely invested in the story told. There were times that they seemed to have emotional reactions to the scenes as they played out. Each had little stand out moments, little bits of flair where their individual skill would shine through. Special mention goes back to Amber Wood, who in a surprising turn plays the piano accompaniment to one of Jamie’s songs in the latter part of the show.

“The Last 5 Years” is an emotionally charged piece of theatre, a story about two specific people that have elements which almost everyone can relate to, whether it’s the first flush of love, the anger of betrayal or the resignation that no matter how you may try, sometimes something just won’t work. In the hands of skilled artists, like at Stillpointe Theatre, it is equally joyous, touching and heartbreaking. Between the performances, the writing or the space, it is rare to find a piece which feels as intimate as this.

With a limited audience size and no off-street parking offered, make sure to come early.

Running Time: 1 hour and 25 minutes with no intermission.