Theatre Review: ‘The Taming of the Shrew’ at Chesapeake Shakespeare Company 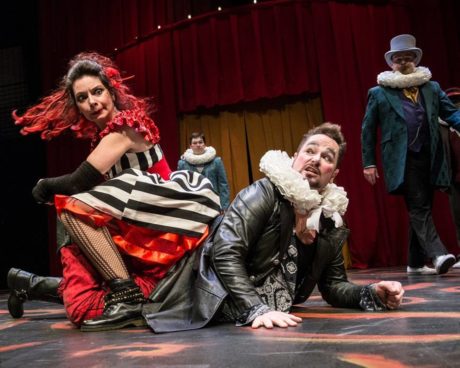 Valerie Fenton, Kevin Brown, Ron Heneghan, and Steven J. Hoochuk in ”The Taming of the Shrew.’ Photo by Teresa Castracane.

Chesapeake Shakespeare Company’s current production of “The Taming of the Shrew” is wildly funny! Although this comedy by Shakespeare is older than 400 years, Petruchio’s plot to court the unmarriageable Katherine is still making audiences laugh today.

Modern versions of Shakespeare’s “The Taming of the Shrew” include Cole Porter’s 1949 musical “Kiss Me, Kate” and the 1999 film “10 Things I Hate About You” where a “pretty and popular teenager can’t go out on a date until her ill-tempered older sister does.”  Most recently, Anne Tyler’s 2016 novel “Vinegar Girl” gives her contemporary take with Kate Battista who ends up “running house and home for her eccentric scientist father and uppity, pretty younger sister Bunny.”

In CSC’s production, Director Ian Gallanar expertly layers the story within the traditional Shakespeare text with some updated references.  The use of Benny Hill and Monty Python style humor allows the cast to deliver their own modern spin on this classic.  The overboard absurdities after the arrest of Vincentio, the father accentuate the comedy aspects seen from many of the more current British comedies.

Ron Heneghan as Petruchio put it all out there, plucking the nerves of Valerie Fenton’s wickedly entertaining Katharina every chance he got. Demonstrating humor with a strong sense of confidence makes Ron Heneghan’s performance one to cherish.  Together, the chemistry between Heneghan and Fenton is spicy hot with plenty of cool humor to help keep things from boiling over.

Gregory Burgess shines in playing several roles including, Gremio the suitor to Bianca (Played by the talented Kelsey Painter ), the servant Biodenello, and the Tailor.  The wide ranges of emotions in his interactions with Bianca’s father as well as with Petruchio and Hortensio made time fly by effortlessly.

Bianca’s interactions with Katharaina showed her as the pampered younger sister.  With Lucentio (Eric Poch), she played up receiving the wedding ring to a glorious end.

Other notable performances include Scott Alan Small as Vincentio, Steven Hoochuk as Haberdasher, and Kate Forton as the Widow.

One of the special attractions that I like about this production is how much of the cast participated in preshow and intermission music featuring Kevin Alan Brown on guitar.  The rendition of “He’s a Rebel” is worth the price of admission.

Adding to the production values are the set and lights designed by Daniel O’Brien, sound design by David Crandall, and Jacy Barber’s costume, wig, and make-up designs.

The production emphasizes appreciation of what life has to offer, not in material possession.  The importance of respect to each other is what this fine production reminds us in the end.

Running Time: Two hours and 20 minutes, with a 15-minute intermission.