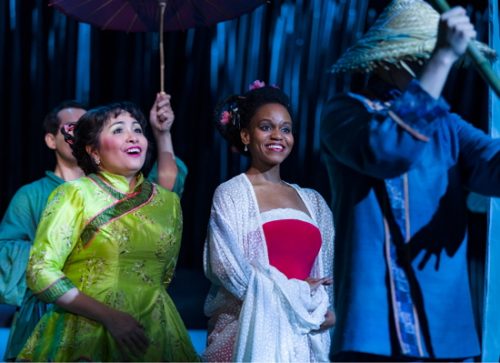 Demon, spirit, snake or human? These are the questions that confront us during ‘The White Snake,’ currently playing at the newly-renovated Baltimore Center Stage. This old Chinese fable about a supernatural serpent who transforms herself into a lovely maiden shows that even the darkest evil is brightly beautiful. And that seeing is believing (or maybe the other way around).

In the story, directed by Natsu Onoda Power, the white snake (Aime Donna Kelly) and the green snake (played with humor and enthusiasm by Eileen Rivera) decide to venture down from the mountain into civilization, disguised as young maidens.  White Snake spots Xu Xian, a poor assistant pharmacist, and falls in love. Nothing could diminish Xu Xian’s sudden joy, but doubt pulls at him as he approaches White Snake’s house. Still, the two ‘wish to spend a lifetime of happiness’ together so get married and open a wildly successful pharmacy.

White Snake (also known as Lady Bai) becomes pregnant and all is going well until Xu Xian receives a visit from Fa Hai (Peter Van Wagner), a man with a villainous heart from the Golden Monastery, who schemes to destroy their happiness. Eventually, Fa Hai’s scheme sends White Snake to a faraway forest and ultimately leads to a battle between the sea and the sky.

“The White Snake” uses puppets (designed by Andrea “Dre” Moore and deftly maneuvered on sticks), music (directed by Jeff Song), choreography (Rick Sordelet for fighting and Stella Choi for movement), and lighting (designed by Rui Rita) to tell its winding tale. Set and Projection Designer Hana S. Kim should be given credit for the special projection effects, including birds flying through the sky and snow falling on the mountain, which create a magical quality. The set is extraordinary, with a floor which connects to a ramp, suggesting the earth and sky are connected as White Snake’s two worlds become one. Parasols are used as props, adding Chinese flair, and fabric easily simulates clouds and rain.  Lighted objects are also used throughout the show, including dragon boats and lanterns.

Costume Designer Nicole Wee reflects how Chinese culture has shifted and evolved, taking cues from contemporary Chinese fashion. The costumes are bright and colorful, with attention to detail – from Greenie’s pink and green shoes to Lady Bai’s scalloped dress. Music Director Jeff Song creates original and contemporary music which blends the old and the new. While traditional instruments, such as the shakuhachi and oud are used in some pieces, another number, featuring the Stag Spirit, is more reminiscent of a rock musical.

Although the story of ‘The White Snake’ dates back to 981, this version is told as a combination of the old and the new, using light-hearted humor with traditional Chinese elements (including the often interjected ‘Stories of a Chinese Drama’). The actors’ language and movements are more modern day than old world China, and many of the characters are theatrical, such as Greenie, playing the White Snake’s loyal servant, or a Chinese client of Lady Bai’s with a strong New York accent. A host of narrators tell the story, including the different ‘forks’ the story takes (a theme throughout the play).

As White Snake, Aime Donna Kelly is confident and kind. She has genuine love for her husband, Xu Xian, and it’s beautiful to see how two different species can exist so well together. Xu Xian is sweetly naïve and endearing. Eileen Rivera, as Green Snake, is feisty and fun, especially when she comes up with a scheme to help White Snake hide her true identity.

Looking at the older audience, I worried about taking my 9-year old daughter to see the play. Would it be appropriate? Would she be bored? But there was no need to worry. ‘The White Snake’ could more accurately be billed as a family play given the modern day language, colorful costumes, special effects, theatricality, and storytelling. The old folktale has universal appeal, and Baltimore Center Stage’s production is incredibly polished and professional. I think my 9-year old enjoyed it even more than I did.