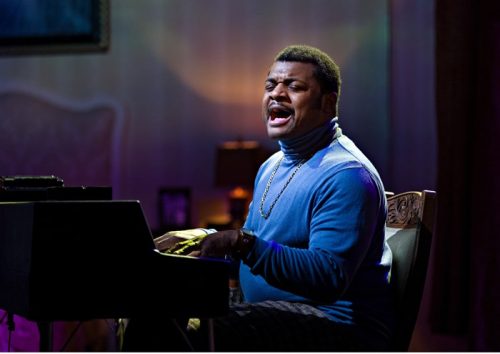 The struggle with mental illness is not something that many people are willing to tackle in a public forum.  The potential embarrassment and fear of rejection makes this topic one that rarely gets addressed yet screams for attention.  When an individual lives a public life, the struggle to meet and overcome these challenges are handled in many ways, not always with a successful conclusion.  The battle between inspiration and torment is the focus of Kelvin Roston Jr.’s one man play “Twisted Melodies” directed by Derrick Sanders based on the life of Donny Hathaway.  Hathaway is a 70s soul singer and composer known for duets with Roberta Flack.

The stage setting is limited to the hotel room where he spent his last evening in 1979.  A projection of the New York City skyline is seen though the 15th floor window.  Mike Tujoi as projection director has the walls showing musical notes during the creative times where Hathaway is performing and backdrops reflecting the change of emotion that Hathaway experiences.  The piano by the entrance door provided a perfect irony as music was the longest constant for Hathaway’s life,

In times of emotional distress, during the talking of “Duke” from his teenage years, you see the shadows on the walls that overcome Hathaway as an individual; a perfect display of the struggles that he experienced.  The fear Hathaway experienced is felt by the audience as well.  The pain felt continues into adulthood.

Rolston delivers solid renditions of Hathaway’s catalogue—including “The Ghetto—Part 1,” “I Love You More than you’ll Ever Know,” and the exquisite “She is my Lady.” The John Lennon ballad “Jealous Guy” showed the power of Rolston’s performance not just as a musician but as an actor.  The description of how music transcends tenderness for one person and yet represents anger for another within a single song, Rolston uses the call and response technique Hathaway used in his live performances which was very well received.   “A Song for You” about his love for his audience received the best ovation from the sold-out audience at Baltimore Center Stage.

Helping understand Hathaway as a man begins with his childhood and of how his grandmother controlled his childhood to the point where he could not experience a normal childhood.  Wanting to eliminate the music “gunfire and screams” his father who he did not truly know pushed his to be the best at what he did.

Only having music as a source of expression could limit the ultimate personal individual growth yet expanding the amazing musical legacy.   Understanding that Hathaway does not want to ever disappoint his band or collaborators (Roberta Flack) drives the emotion shown throughout this immense performance.   When a story can be told and truly appreciated even 40 years later, the life story presented is one to be remembered beyond own time.

The fourth wall of this one man show is broken down by asking about who was part of the machine Hathaway felt was watching him.  The noises by the phone ringing, radio playing, or banging on the hotel room door created the doubt you felt within the stirring performance.  Wanting to see Hathaway get past the demons tearing him up inside was created with the masterful performance by Rolston.

The opportunity to explore and discuss the impact of how mental illness impacts society I believe is more open now with expanded mediums than what was available in the 1970s.  The legacy presented within the story is beyond Hathaway’s music. It is a reflection of how to improve your life and how to reach out for a better life.

“Twisted Memories” presents a dynamic, powerful performance by Roston Jr. as Hathaway.  The audience connects with the performer in such a way you feel the raw emotion that Hathaway experienced in the last hours of his life.  Donny Hathaway is a life taken too short.

Running Time: Approximately one hour and 40 minutes, with no intermission.