Theatre Review: ‘You Are the Hero’ at Single Carrot Theatre 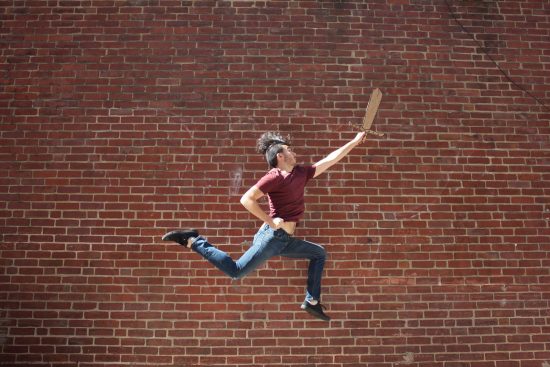 On developing a solo performance, Daniel Park creator and performer of “You Are the Hero,” now playing at Single Carrot Theatre says, “Solo performance is most often resource light. Relatively, it doesn’t cost as much money to produce, which makes you more likely to get gigs, easier to travel around, etc. That being said, there’s a huge stigma behind what solo-performance is. I usually hate solo-performance, especially autobiographical. But also usually I hate interactive theatre. So I figured, if I could make solo-performance and interactive theatre, that didn’t make me uncomfortable and unhappy, maybe other people wouldn’t be uncomfortable or unhappy too. And so far, we’ve found a lot of success there.”

For this performance the audience is asked to sit in two rows of chairs facing each other on the stage.  This is because the audience members are actually a part of this interactive live action video game.

Who knew that saving the world was only a text or phone call away?

Daniel Park gives everyone in the audience a chance to be the hero as he takes you on an “epic journey to save the world!” Progress and Growth have been corrupted by Greed, Happiness has been thrown from the sky, and the Door to the Apocalypse has come unlocked.

Props made out of cardboard, sound effects and music, and even free beer wheeled in mid-show kept the mainly early 20’s crowd engaged and entertained.   What is more, smart phones are NOT asked to be put away. In fact, the “gamers” earned points by doing tasks with their smart phone.  Who knew that saving the world was only a text or phone call away?

Though the premise may be fantasy, Daniel Park has audience members making real efforts to be the hero and make a difference.  He lets each person think and choose what they would do in order to make the world a better place.  How’s that for choose your own adventure!

“You Are the Hero” is a part of Single Carrot’s “Undercurrent: Theatre for Now” series that features 4 plays in 3 weeks.

“Your Are the Hero” plays through March 26 at the Single Carrot Theatre in Baltimore.  For more information, visit here.