1. Mrs. Miller Does Her Thing at Signature Theatre.

“Monk and Brockman carve out the entertaining and deeply moving core of the play.” – Chris Williams.

Synopsis: Mrs. Miller can’t sing—but don’t tell her that. Based on the real life story of Elva Miller, this touching and funny portrait offers Monk the role of a lifetime as the devoted, warbling songstress whose operatic, off-key singing became an unlikely pop phenomenon in the 1960s. Take a delectable romp through hits like “Downtown,” “Monday Monday,” “Girl from Ipanema” and more. Simply irresistible, when Mrs. Miller does her thing, it’s so bad—it’s good. 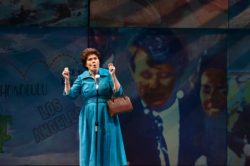 2. The Taming of the Shrew at Chesapeake Shakespeare Company.

Synopsis: Before her younger sister can get married, fiery-tongued Kate must have a husband. Fortune-seeking Petruchio comes to town and accepts the challenge, but his attempt to “tame” his new bride results in a tumultuously titillating battle of the sexes. 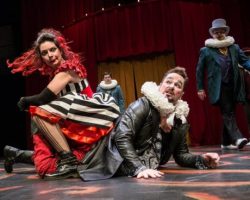 Valerie Fenton, Kevin Brown, Ron Heneghan, and Steven J. Hoochuk in ”The Taming of the Shrew.’ Photo by Teresa Castracane.

Synopsis: The tragic, true story of the trial and lynching of a Jewish man wrongly accused of murder. A rich and intricate score by Jason Robert Brown, and a book by Alfred Uhry that delves fearlessly into the complexities of early 20th century social relationships in the South. A musical of profound depth and beauty. 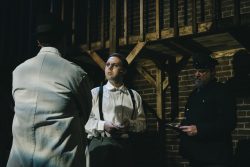 4. The Last 5 Years at Stillpointe Theatre.

“… it is rare to find a piece which feels as intimate as this.” – Tucker Nelson.

Synopsis: “The Last 5 Years” is a contemporary song-cycle musical that ingeniously chronicles the five year life of a marriage, from meeting to break-up… or from break-up to meeting, depending on how you look at it. 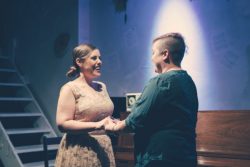 Amber Wood as Kathey and Amanda J. Rife as Jamie in ‘The Last Five Years.’ Photo by Rob Clatterbuck.

“The powerful vocal performances and acting will stay in your soul long after you leave the theatre.” – Liz Ruth-Brinegar.

Synopsis: Based on E.L. Doctorow’s celebrated novel, this epic Tony-winning musical depicts three families striving for the American dream at the turn of the 20th century. As the country balances on the cusp of social change, the lives of a wealthy white family, a daring Harlem musician and a determined Jewish immigrant intersect—and their fates are inextricably bound and profoundly changed. With an expansive musical score, striking relevancy and a who’s who of 20th-century historical characters, “Ragtime” confronts both the unbridled optimism and the stark reality of life, liberty and the pursuit of happiness. 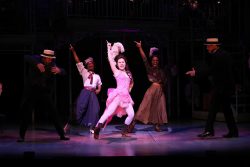