‘A Quick 5’ with Daniel Ross 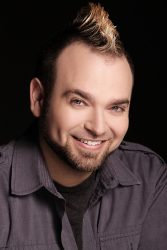 Daniel Ross is one of the newest and quickly-rising voice artists working in the business today. Originally a theatre and film actor from Maryland, he moved to Los Angeles to begin pursuing work in the voice over industry. Most notably, he is the voice of Donald Duck in the smash hit series “Mickey and the Roadster Racers” on Disney Channel and Disney Junior. He was also featured as the lead-villain Starscream from 2007’s “Transformers: The Game” selling over 3.6 million copies worldwide. And has voiced the lovable Lucky from some of the Lucky Charms Cereal commercials! You can also hear him on “Bunsen is a Beast” as The Keeper of the Cures on Nickelodeon, and listen for him in the upcoming season of “The Tom and Jerry Show” among many other credits!

When did you first realize that you have a talent for voice-overs?

I think based on all the trouble I used to get into as a kid, imitating my teachers from school and various cartoon characters from my childhood was the beginning of it all. The talent wasn’t realized until much later on when it became a hobby and I learned more about the actual business of Voice Over after years of theater training and film production work.

What is the most difficult character voice that you have played and why?

Donald Duck is by far the most difficult in technique and yet the most personally rewarding. It took me 36 years to perfect a voice that’s over 81 years old and even then, I had to relearn how to control it to truly emulate the character and his mannerisms. Most difficult for sure, but obviously my favorite!

What are some of the key topics that you will be covering in the voice-over workshop?

I’m going to be discussing the process behind discovering your “instrument,” how to create character voices, and where those capabilities can lead you in the world of Voice Over. Voice Over is a very competitive field so it is crucial to understand what you are capable of and then market yourself accordingly to break in and continue to work. 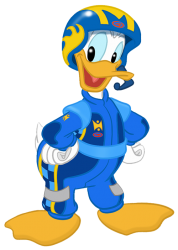 Donald Duck From “Mickey and the Roadster Racers.” Graphic courtesy of Disney.

What do you like most about teaching voice-over workshops?

I have always enjoyed teaching and imparting information to other people as openly as I can. Teaching a workshop gives me the ability to do so in a fun setting where those involved are already interested in what I have to say. Voice Over is an incredibly fun and rewarding field of work and my hope is that, as others have done for me, I can motivate someone else to consider following their dreams whether it’s in the world of Voice Over or otherwise!

What has been your most rewarding voice-over experience and why?

Meeting and ultimately working with my childhood heroes in this field and being accepted as a part of the community has been one my biggest joys. Knowing that I had some talent, took the risk to move to a far away land, and ultimately found my calling doing something I absolutely love. The Voice Actors, the Fans, the kindness and creativity of those I am now surrounded with astounds and inspires me every day.