‘A Quick 5’ with Nikkole Salter 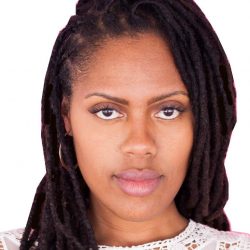 Nikkole Salter is starring as Lady Macbeth in Shakespeare Theatre Company’s production of “Macbeth,” playing from April 25th through May 28th.  Born in Los Angeles, she is an OBIE Award-winning actress and writer.  Nikkole received her MFA from New York University and a BFA from Howard University. Her play “In The Continuum” won the NY Outer Critics Circle’s John Gassner Award for Best New American Play in 2006 as well as a Helen Hayes Award in 2007.   Ms. Salter can be seen in Gavin O’Connors feature film “Pride & Glory” starring Ed Norton, Colin Farrell and Jon Voight.  Off-Broadway credits include “In the Continuum” at Primary Stages, “Inked Baby” at Playwrights’ Horizons,  and “The Royale” at Lincoln Center.

Please tell us about your interpretation of Lady Macbeth and how it might be different from other performances we have seen from other actresses.

I think, generally speaking, interpretations of the play “Macbeth” I’ve encountered lean into a Macbeth and Lady Macbeth that are inherently evil and sinister people driven by supernatural inhumanity.

In working on crafting the characters of the play with Liesl Tommy, our director, she encouraged all of us actors to take a different approach.  Liesl pushed us to discard those interpretations and rigorously mine the script for the humanity of the characters.  She encouraged us to lean into all the given circumstances Shakespeare offers in the text, even those he doesn’t necessarily dramatize in their fullness.

When mapping out Lady Macbeth’s motivations and arc I decided, since Shakespeare didn’t make a point to speak about her origins, that she is an outsider in the world of the play.  She’s not of noble upbringing, but has married into a world of Queens and Thanes, which means she is probably treated as though she is of lower status, particularly when Macbeth is not around.  The text supports this, as Banquo comments about how complimentary King Duncan is being to Lady Macbeth at Inverness – suggesting that Duncan is not usually so nice.  I have also decided that Lady Macbeth is a high-achieving woman of color educated at Harvard Business School cult (which I’m sure came with it’s own challenges and shaped her world view in a very particular way) who has set aside her own career as an entrepreneur (more than likely at her own family’s dismay – who throws away a Harvard education!?) to be Macbeth’s wife, leaving her in a situation where she has no outlet for her well-developed drive to achieve.  Her entire life revolves around Macbeth and what they create together, her own individual potential unfulfilled.  Lady Macbeth, in marrying Macbeth enters a world where bloodlines are very important; that is, having children and nobility makes the most impact on how you’re valued and respected, and makes a huge difference in access to power and comfort.  But at the onset of the play, we find her dealing with the recent lost of her baby boy (where boys are probably valued more than girls), and at the beginning of the realization that she can no longer have children.

In our production, Lady Macbeth comes from a different country and culture, so when her child dies I imagine she has no community comfort and none of the familiarity of the rites and rituals from her upbringing with which to cope with the loss, and probably too much pride to reach out to her home community, the people who disapproved of her choice to leave her career path and homeland to marry.  Instead, Lady Macbeth finds herself at the mercy of a community of people who look down upon her just for being born where she was born, and whom she perceives to be unsupportive, and unappreciative of her accomplishments.

In addition, Lady Macbeth is a military wife; that is, she’s madly in love (she did abandon her homeland for the dude!) and married to an extraordinarily effective and high ranking soldier often deployed on missions he can’t talk about and, when not deployed, often dealing with varying degrees of PTSD at home rendering him emotionally inaccessible in dealing with the grief of their child’s death as well, I imagine.

I believe having her baby boy validated so many of Lady Macbeth’s life choices and imbued her with so much meaning and purpose, that the loss of the child proved broke apart her very identity and crashed her hopes and expectations for life.  I believe it is from this place of deep grief, feelings of failure and inadequacy, inability to carve out her own pathways of achievement, disconnection from family and community, and an inability to cope with it all that Lady Macbeth hatches a plan to make her husband King; that is, recapture her self-esteem and hopes for a great life by acquiring and building with her lover a sense of legacy and status that they no longer can manifest biologically.  She is not an inherently evil woman.  Lady Macbeth, in my interpretation and performance, is a woman who has a moral barometer — this is why she has to ask for supernatural assistance to remove those inclinations from her heart so that she may see her plan through.  Yet, she is also a woman with a deep need for validation.  And, ultimately, it is those losses, and growing distance between those very inclinations and that need initiated by their murder of Duncan that drive her to madness and suicide.

You have written 7 full length plays.  Do you believe that being a writer gives you an edge in performing?

Most actors read scripts to acquire an understanding of the given circumstances and humanity they will need to embody the journey of their character’s change.  When we gather that information from the script it creates a framework for the choices we make and ultimately manifest – so we’re not choosing from infinite possibilities, but ones in alignment with the needs of the story.  I believe that understanding the conventions of dramatic storytelling as a writer allows me to also look at a script for how a character functions in a story as well – in so doing, I think I expand my framework to include choices related to the exploration of the story’s themes as well.  I don’t know if I’d call that an edge, because that thematic understanding doesn’t always easily manifest in playable options.  At the end of the day, I still have to be about the business of finding a physical and vocal manifestation of all of that understanding, which is the same challenge that every actor has to face.

As an actress, do you find it challenging getting premium roles in an industry that often stereotypes when it comes to casting?

Let me just say, I find it challenging to get most any role, let alone a non-stereotypical “premium role.”  And I think most actors find it challenging to get premium roles – that is, roles that have really well written and satisfying arcs, in tightly-wound stories that have some meaning told with honesty and artistic rigor.  Those kinds of dramatic stories are not ubiquitous as of yet in any medium, so, I think everyone in my business experiences varying degrees of  being limited to stereotypical roles.  Ultimately, dramatic storytelling (like most things in the western world) is valued as a commercial endeavor.  So, as long as money is being made with stereotypes, we’ll keep seeing them.  They’re formulaic, familiar and (even if negative) validated by our purchase power. They’re the assembly line of story-making.

I think, however, our industry (our world too!) is leaning more and more towards a local, artisan and craft experience.  We want things that are fresh, hand-made, additive free, creative, unique.  Storytellers are getting more and more tired of the assembly line stories, and audiences are too!  Audience taste evolution is demanding more and more of us… and as they make those demands with their wallets, we will see differences emerge.  I don’t, however, think the assembly line will go away any time soon – there’s too much money to be made with those formulas as we’ve trained international audiences to crave them.  Nevertheless I have hope.  In the future I believe actors will continue to find it challenging to get roles, but when we get them, I believe there will be a higher probability that they will be premium.

What attracted you to begin a career as an actor? Why do you feel this is the ideal profession for you?

I started acting when I was 8 or 9 so I was attracted to being able to dress up, the sustained attention of lots of people, and the immediate gratification of applause.  As I have evolved as an artist I realized that I am a part of an ancient tradition of storytelling for the conscious evolution and preservation of humanity.  I believe I have an inherent inclination to communicate with words and body and a gift for empathy.  And while there are many other professions that support that inclination and gift, I believe that very few of them do so in a way that requires the unification and use of body, mind and spirit as thoroughly as acting does.  This profession has proven to be ideal for me because it is a complete and never-ending cycle of self-development and service.  It is extremely rewarding and fulfilling.

What other performers do you admire and why?