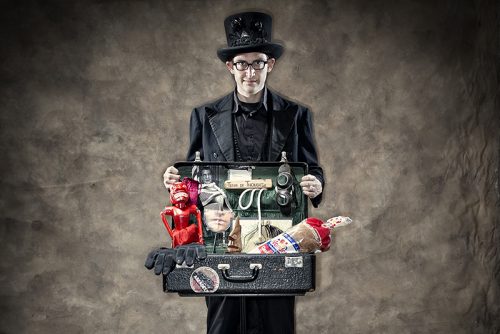 “Do you believe in magic?” That is the question asked in the opening of David London’s “Magic Outside The Box Cabaret Show” at the Theatre Project. The need to believe in something you may not be able to explain is what I consider the essence of any magic show.

There is more to magic than a simple illusion that you may see with a deck of cards, disappearing balls, or a coin disappearing out of thin air.  For any magician to succeed, there must be an individual connection with each member of his audience, regardless of the ages in attendance.  The challenge presented to the magician is to avoid the usual clichés exposed by every television show, internet blogger, and Vegas Strip show.  David London’s show is designed to intersect magic with surrealism and have you question the illusions being presented and not with the answers to what you have seen.

David London discovered that he was a magician at the age of seven, and has since spent over 20 years trying to figure out just what that means. He has created five original theatrical magic productions, including Magic Outside The Box (for audiences 12 and older), The Adventure to the Imagi Nation (for children 5 to 11), and Magic and Surrealism Workshop (for professional entertainers) which were presented at various times this weekend at the Theatre Project.  Per London’s website his performances combine “magic with storytelling, comedy, philosophy, surrealism, and that which cannot be defined, to create original shows of magic unlike anything you have experienced before.”

An intimate and entertaining close up magic preshow lets the audience see classics like the three coin Monty, card tricks, classic rope tricks, and reappearance of colored balls.  Who knows, maybe he will let in you on one of the secrets?

A taste of puppetry opens the show with an introduction from Satan promising peace and happiness.  That promise which in itself would encourage you take a closer look at everything presented over the course of this uniquely mind-opening evening of magic.

A fun portion included Wonder Bread’s astrological connection to London by the sharing of a birthday, albeit several years apart, provided the question of whether magic is a mind game or just pure speculation.

Other amazing tricks used by London include the impossible destination of a playing card, Dr. Nodnol’s Imagination Rejuvenation creating optical illusions for an audience member, and having a dollar bill reappear in a location I never imagined possible.

Without giving too much away, the finale is about being able to predict the future with sensory deprivation. It provided laughs with an audience member with questionable timing.   The use of jelly beans, tissues and a piece of fruit provides for a creative approach in making a point.

London presents a show that encourages imagination to challenge the standard thinking presented by the usual mediums and some unusual ones.  Expectations of a traditional magic show will be satisfied in combination with a vision of what has yet to be seen by the fans of magic.  What is imagination versus what is real will be blurred by the end of this show to the joy of those in attendance.  Yes, I still believe in magic.

Running Time: Approx 80 minutes in addition to a 25 minute preshow.